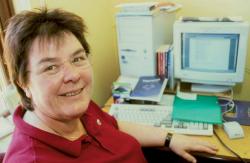 Assoc. Prof Joan Hambidge has a new volume of poetry.


CONSIDERING that she was born on September 11, it may not appear that odd that Associate Professor Joan Hambidge of Afrikaans and Netherlandic Studies has dedicated much of her sixteenth volume of poetry, Ruggespraak, to New York and the events of September 11, 2001.

In the collection, released by Protea Publishers a few weeks ago, Hambidge again tackles the kind of issues she says she's always been interested in; travelling, relationships, the poem as relationship, and the poem as ars poetica.

This time around, she couches these topics around her sojourns in New York and Japan, a country she visited for the first time earlier this year.

A keen peregrinator, Hambidge has used her accounts of her many journeys as more than just travelogue.

â€œWhen you write about the landscape of a country, it reflects something about your own inner landscape,â€ she says.

Her interest in New York goes beyond the fact that her birthday falls on a day that has risen to such global significance. Long influenced by American â€œEast Coast poetsâ€ such as Wallace Stevens and Elizabeth Bishop, Hambidge has been a regular visitor to New York for many years.

â€œI find it a very exciting and creative city,â€ she says.

But the events of 2001 has, she says, changed the nature of her relationship with the city. â€œWhen you write about a city, it can be like a love affair,â€ she observes.

â€œBut New York has changed, the world has changed, and it's brought about a change in self. And I think poetry is able to register that.â€