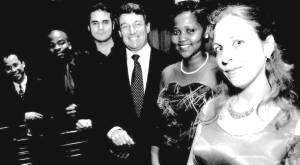 
FOUR performers from UCT's South African College of Music (SACM) had the honour of vying vocally for the inaugural Schock Foundation Prizes for Singing in the Baxter Concert Hall on November 11.

Sopranos Janine Magnin and Nokrismesi Skota, and baritones Phumzile Magongoma and Louis van der Merwe had, after arduous qualifications, been selected as finalists for the competition, and had to contest for top honours in the women's and men's categories on the evening. Skota took first prize in the women's section, while Magongoma was chosen as the winner of the men's event.

The winners each took home a cheque of R4 000, while the runners-up earned themselves R1 000 each. Prizes were presented by Brian Bechet, trustee of the Schock Foundation, a charitable and educational foundation established by the late Judge Philip Schock.