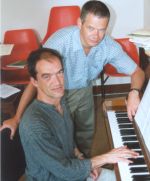 Musical collaboration: Raptus by Associate Prof Hendrik Hofmeyr premiered at the City Hall last month, serving as a launch for his new CD.


RAPTUS, the work for violin and orchestra for which Associate Professor Hendrik Hofmeyr was awarded the prestigious Queen Elisabeth of Belgium Composition Competition in 1997, finally premiÃ¨red in the Cape Town City Hall last month.

The soloist was Zanta Hofmeyr (no relation) and the British conductor Graham Lea-Cox conducted the Cape Philharmonic.

The occasion also served as the launch for a CD, sponsored by the Distell Foundation for the Performing Arts, of music by Hofmeyr. The renowned South African pianist, and Hofmeyr's colleague at the SACM, Associate Professor Francois du Toit, is the soloist in the Piano Concerto, which is dedicated to the memory of Melanie Horne.

Horne, who studied at UCT under Lamar Crowson, had requested Hofmeyr to write a concerto for her in 1997, but tragically passed away when work on the piece had barely begun.

Also on the CD are the Flute Concerto (with Gauteng flautist Helen Vosloo) and a work based on two Xhosa songs entitled Iingoma. The recording of this CD, under the Swiss conductor Emmanuel Siffert, constitutes the swan song of the National Symphony Orchestra, which was disbanded on the day of its completion.

Both the music and the performances have received glowing reports in the press. Stephanus Muller, writing in Die Burger, calls Hofmeyr's style â€œsensuously captivating and emotionally grippingâ€, and continues, â€œI know of no other living composer (let alone a young one) who manages the considerable risks of this highly individual aesthetic with so much conviction.â€