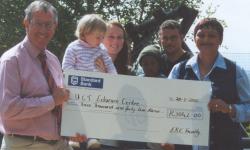 Cool funds: EBE helped the UCT Educare Centre raise money for five new water coolers (a form of air-conditioning) for the children. Photographed at the cheque presentation were (from left) Faculty Dean Prof Cyril O'Connor; Cara Whittal (3); Marianne Vanderschuren; Chulumanco Voyiya (3); Dr Eugine Sickle (Chemistry), chairperson of the Educare Management Committee, and Marilyn Petersen, the Centre's coordinator.
ALL FIVE classes at UCT's Educare Centre will now have cool air wafting through their environs, cooling hot tots in summer, thanks to a successful fund-raising drive between the Centre and the Faculty of Engineering and the Built Environment.

Marianne Vanderschuren, a senior lecturer in Civil Engineering, initiated the idea following a visit to the Centre last year.

â€œI noticed the children suffered from the heat and indicated that something should be done. As an air-conditioning system was too expensive, I suggested water coolers,â€ she explained. Water coolers are described as â€œone step downâ€ from proper air conditioners. â€œThese are not as powerful as air conditioners, but they do cool the air,â€ Vanderschuren explained.

The Centre undertook various fundraising activities such as food stalls and raffles, collecting just over R3Â 000. The EBE Faculty matched the figure and, with the fund further boosted by an anonymous donation of R1Â 500, the Centre was able to buy a water cooler for each classroom.

The Faculty has supported other ventures and recently donated a container to the Khayelitsha Cricket Club for the storage of their equipment.

Speaking at the cheque presentation, Faculty Dean Cyril O' Connor quipped: â€œWe expect a minimum of five engineering students from among your children in 15 years time!â€