Honorary degree builds on collaboration between Caira and Romania's UMF 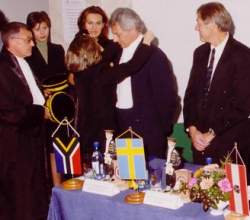 Colourful ceremony: Prof Mino Caira accepts the University of Medicine and Pharmacy (UMF) ceremonial toga after receiving a Doctorate Honoris cause from the Romanian institution. In UMF tradition, each recipient of an honorary degree is given a bronze medal bearing a likeness of Iuliu Hatieganu (founder of UMF), a statuette and a boquet of flowers.

The award was made for â€œprodigious scientific and didactic merits in the field of pharmacy and continuous support to the universityâ€ following several years of successful collaboration between Caira and Bojita, who also heads research groups in pharmaceutical technology and drug control.

The collaboration is in the areas of drug polymorphism and cyclodextrin inclusion of drugs and has led to joint publications, conference presentations and co-supervision of students. Caira has also presented several seminars to fifth-year UMF pharmacy students on the solid-state characterisation of drugs.

â€œIn 1996, the University participated in a contest organised by PHARE and was the only medical university in Romania designated as a primary level institution.â€ According to Caira, the PHARE programme is one of three pre-accession instruments financed by the European Communities to assist the application countries of central Europe in their preparations for joining the European Union (EU).

Of the five honorary doctorates awarded at the graduation ceremony, four went to European medical experts specialising in urology and organ transplantation.

Despite his exotic sounding name, Caira is a born-and-bred Capetonian and his connection with Romania is purely scientific (his father, an Italian, was a POW at Zonderwater but decided to stay in South Africa after release instead of being repatriated). He gained his PhD from UCT in 1975.

After a stint at the University of Port Elizabeth, Caira returned to UCT as an associate professor in 1988. He was promoted to full professor this year. â€œSome of my research collaborations happen to be with pharmaceutical chemists in countries in central Europe, such as Hungary, where I spent research leave, and Romania, where I have attended congresses and lectured pharmacy students.â€