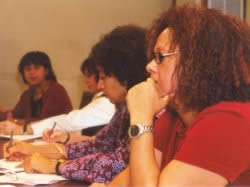 Consolidating gender studies: (from right, front to back) Natasha Primo, WomensNet; Amina Mama, AGI chair; Amanda Gouws, Stellenbosch University; and Shireen Hassim, University of the Witwatersrand, were just some of the delegates who attended the conference.

Attending the three-day conference were delegates (including men) who work in the field of gender studies, either in university departments or within NGO research programmes and publication organisations, such as the Centre for Conflict Resolution, Agenda and The Women's Health Project.

According to Dr Jane Bennett, Director of the AGI, the objectives of the workshop included creating opportunities for the creation of a gender and women's studies network in South Africa and discussing and developing ideas and strategies for strengthening these studies. Key to these ideas was the need to develop linkages with colleagues in other African countries.

Bennett says that the workshop also centred on the ongoing need to create innovative and appropriate research and teaching projects. â€œWe work in contexts battling against poverty, HIV and globalisation and these realities need to be central to all our work and our discussions explored ways of doing this well.â€

Also on the agenda was the need for stronger linkages between organisations, especially between well-resourced and poorly resourced universities and the power of affiliation with those working elsewhere on the continent, on similar issues.

The workshop concluded with two concrete decisions. The first was to form a Gender Studies Association in South Africa, to spearhead the development of a nationally focused network, capable of lobbying at policy level and of supporting new research and teaching initiatives.

The second decision was that the AGI continent-wide project would invite South African delegates to its fold.