Birds of a feather breakfast together 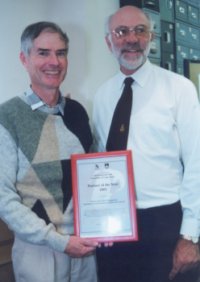 
BIRDS of a feather breakfasted together at the Avian Demography Unit recently. The reason for the hot coffee and croissants? A celebration of progress made on the various seabird and shorebird projects run by the Unit in conjunction with many other organisations.

ADU Director Professor Les Underhill made use of the opportunity to present a Partner of the Year 2001 citation to Dr Rob Crawford from Marine and Coastal Management in the Department of Environmental Affairs and Tourism (who collected it on behalf of the MCM team).

"MCM, especially though the 'seabird project' led by Dr Crawford, provide enormous support to the Unit," Underhill said. "They partner us in a range of projects, assist staff and students with transport and access to islands, provide supervision for postgraduate students and also invited us to participate in the Prince Edwards Islands Millennium Expedition in 2001."

In turn Ione van der Walt, one of the original wader ringers in the Western Cape Wader Study Group in the early 1970s, praised Underhill for his development of the Unit, one, she said had "come a long way".