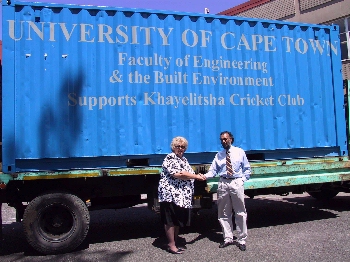 Shake on it: Erica Schulschenk, from the office of the Dean of Engineering & the Built Environment, met with Nabeal Dien, Director of Amateur Cricket for the Western Province Cricket Association, to hand over a new container to the Khayelitsha Cricket Club. The container will be used to store the Club's equipment in an effort to keep it safe from theft.


A BRIGHT blue container has been donated to the Khayelitsha Cricket Club, and the Faculty of Engineering & the Built Environment has seen to the sight-writing that "marks" the facility and advertises the Club very visibly to the community.

The container will be used to store all the Club's equipment, which has suffered from theft due to a lack of secure storage space.

"The Khayelitsha Cricket Club is one of the larger junior clubs in the Province and the focus is very much on junior development," Nabeal Dien, Director of Amateur Cricket for the Western Province Cricket Association (WPCA), told Monday Paper.

In the last two to three years, due to the Association's programmes, we have been able to identify some talented youngsters from the Club."

The Club was formed in 1990 and comprises three senior teams and 10 junior teams. The Club's present coach is Cyril Ntshidi, a Western Province U/19 selector, as well as a senior provincial selector and one of the WPCA's regional coaches.