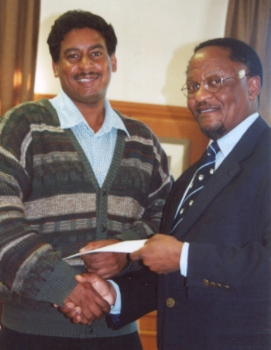 Vigilance rewarded: The Vice-Chancellor, Prof Njabulo Ndebele (right), presented a crime prevention award to Jeffrey September from ICTS for his assistance in the arrest of an alleged thief in whose home a large amount of University and student property was found.


THE Vice-Chancellor, Professor Njabulo Ndebele has presented Information Communication and Technology Services (ICTS) staff member Jeffrey September with a crime prevention award for his part in the arrest of a man who has subsequently been charged with seven counts of housebreaking and theft from the ICTS, Menzies and PD Hahn buildings.

Ndebele praised September for his commitment and courage and willingness to put himself in "a difficult situation so that we can have a safe environment". "This is also a signal to the community that we're not watching from a distance," he added.

On Sunday, February 10, September arrived at his office in the ICTS Building and experienced problems unlocking his door. He noticed that the latch was in the closed position and, realising that someone was inside, he knocked on the door for some time before the alleged thief opened the door. September called Campus Protection Services who found the man in possession of various tools and a stolen staff access card. A search warrant was obtained for his living quarters and a search revealed a large amount of University and student property in his room.

"This was a very good arrest as the accused has been at large for a very long time and many hours of observations and investigations were carried out in order to arrest this person," said John Tunstall, Risk Services Manager.