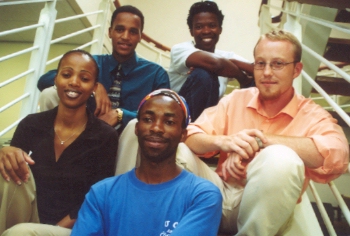 Leading the way: (left to right -- back) Zama Mvulane, Phiwe ka Mtwebana, and (front) Connie Mpokotho, Mcebo Sigudla and Thierry Luescher hope that the new Student Research Institute (SRI) will help to produce a new generation of researchers and academics.


A FLEDGLING student group plans to play a formative role in forging a new generation of academics and researchers, specifically among those from disadvantaged communities.

One of the major objectives of the Student Research Institute (SRI) is to develop, empower and encourage young researchers into taking up and pursuing academic and research careers, explained Zama Mvulane, responsible for research and student development within the SRI. Mvulane, along with Thierry Luescher, Connie Mpokotho, Phiwe ka Mtwebana and Mcebo Sigudla, make up the institute's team of executive directors.

According to Mvulane, consultation with various student bodies had indicated that there was a strong need for a student research centre that would make a "substantial" contribution in the development and training of young researchers. The establishment of the SRI had been welcomed and supported by academics and students, as well as the Dean of Students, Dr Loveness Kaunda, and Deputy Vice-Chancellor Professor Martin West, added Mvulane.

"The SRI is aimed at cultivating a spirit and culture of critical enquiry and scientific research among students," he said. It would do so through the formation of student research groups, projects and publications, research "squads" and research-related services, among other things.

The SRI would also like to "engage in a concerted effort" with departments and academic staff in offering relevant seminars, workshops and courses, Mvulane noted. "We intend to make a novel and substantive contribution in the production of excellent and reliable knowledge and the early development of young top-level research at the University of Cape Town and in many of South Africa's universities."