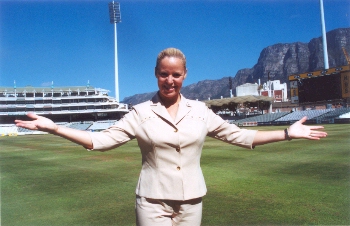 Green, green grass of home: Penny Jones on the Newlands Cricket Ground, the venue for the opening ceremony of the 2003 Cricket World Cup.


PENNY Jones will put on display some of the other talents she picked up while doing her fine arts degree at UCT when she orchestrates -- with all the pomp and fanfare expected by fans across the globe -- the ceremonies that will form part of the Cricket World Cup 2003 tournament in South Africa.

As the executive producer of the 2003 ICC Cricket World Cup ceremonies, Jones is currently based at the Newlands Cricket Ground, the venue for the opening ceremony on February 8 next year.

This will be the biggest stadium theatre production -- the three-dimensional use of performers to tell an unfolding story by creating massive coloured shapes, patterns and images on a central field of play -- ever staged in the country and will involve some 5 000 people, she told Monday Paper.

Jones' winning the privilege to produce the World Cup events had a lot to do with a rÃ©sumÃ© that boasts contributions to some of the most spectacular showcases in international and local sporting history.

She worked as a volunteer on the opening and closing ceremonies of the Atlanta Olympics in 1996, produced the ceremonies for the Cape Town 2004 Olympic Bid, staged the mass displays for the 2006 Soccer World Cup Bid Logo launch, and produced the 2 500- 3 500 strong mass displays for the opening and closing ceremonies of the 7th All African Games in 1999. And then, of course, there were the three months that she -- at the exclusive invitation from executive choreographer Doug Jack -- worked on the memorable opening ceremony of the 2000 Sydney Olympics.

The road to Newlands and the above all started at UCT in the early 1980s, Jones noted. It was here that she was introduced to the art of drum majoretting, just about the time that it was evolving from a bit of "sexist" entertainment into a recognised sport.

Over the next few years, she co-founded the very successful Drill Team SA that crossed racial and gender boundaries, and also trained a number of championship winning teams, notably in Gauteng. This included the Oosrandettes Show Majorettes Squad, the first all black team to claim the throne at the SA Indoor Show Majoretting Championships.

Later she started her own majoretting training business -- "unheard of in those days" -- and it was this venture that eventually lead to Atlanta, Sydney and Newlands. "It's not an overnight success story. I've been in the trenches and have worked on this for over 15 years," she noted.

For now, Jones and her co-choreographers are looking for 5 000 volunteers to take part in the Newlands opening ceremony, with auditions scheduled to start on April 1.

Anyone older than 10 can apply, and Jones and her colleagues are looking for dancing and other talents. It is expected that Capetonians will more than likely make up the majority of the applicants, although visitors from around the country and world may also apply.

Those who would like to take part in the event can find more information on the application process and requirements at www.cricketworldcup.com.

"We want to present a truly African spectacle to showcase our continent, our country and our city," said Jones.