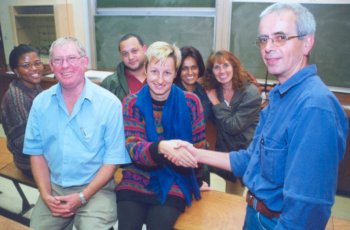 
VICKY Scholtz, IT manager in the Faculty of Humanities, was voted in as President of the UCT Employees Union (UCTEU) for 2002/2003 at its AGM two weeks ago. Scholtz, who served as vice-president for the past year, was elected as successor to Chris Tobler, who stepped down after a two-year tenure as Union president.

STAFF Development and Training hosted a small celebration to hand over certificates to six staffers who successfully completed the Keyboard Skills Course, a pilot project in the department, presented by Shakiena Cassim.

GSB Director Professor Nick Segal has been invited by the prestigious European Foundation for Management Development (efmd) to join an international team of auditors in Canada next month. The team, made up of three peers – mostly deans of other business schools such as Professor Segal – and a representative of efmd, will assess the application of the Richard Ivey School of Business for accreditation by the Foundation.

Professor Segal's participation in the process will help to boost both the GSB's profile on the international stage and will reinforce its networks with business schools around the world.

The European Foundation for Management Development is Europe's largest network body of its kind with over 400 members drawn from academic, business, public service and consultancy groups. Accreditation from this respected body confirms that a business schools programmes meet international standards of excellence. Last year, the GSB became one of the first schools outside of Europe to be accredited by efmd, joining the ranks of some 55 schools worldwide.