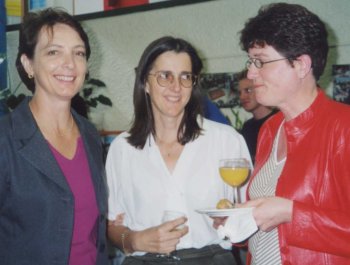 
THE DEPARTMENT of Chemical Engineering went Dutch recently when they hosted a group of 25 PhD students and two lecturers, Professors Marianne Vermue and Remko Boom, from the Food and Bioprocess Engineering Group in the Agrotechnology and Food Sciences faculty at the University of Wageningen in The Netherlands.

"This is a small technical university, well-known for its research and education in fields relating to applications of biotechnological and biochemical process engineering," said the Chemical Engineering's Dr Stephanie Burton. "Several of the students gave presentations on their research projects and several of ours did the same."

According to Burton, UCT and Wageningen share a number of common areas of interest between their research groups, especially in biotransformations and biochemical processing. The group was on a tour, which is organised every two years by their department for their PhD students, to learn about biotechnology developments in other countries, such as Poland and South Africa.

They also visited other South African universities and industries during their trip. "We regard this as an opportunity to establish new collaborations and hope to set some up in the near future," Burton said.