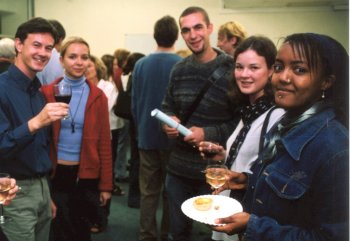 Speaking with forked tongue: (from left) Marco Graf, Yana Surkova, Joshua Low, Jacqueline Rutter and Gwendoline Louw were among those at the class medal ceremony of the Department of Modern and Classical Languages and Literatures.


IT WAS a gathering of Babelian proportions when the Department of Modern and Classical Languages and Literatures recently convened – with an entourage of four foreign consuls as guests – to hand out medals and prizes to its most outstanding students for 2001.

The medals and book prizes are awarded annually to students registered for the various programmes in Classics, French, German, Greek, Italian and Greek studies, among others, in the department.

As usual, there were a number of foreign consuls on hand to present the prizes, specifically Bruno Clerc (France), Axel Schwirtz (Germany), Georgios Iliopoulos (Greece) and Paolo Pandolfi (Italy).

This year, there were also numerous students who excelled in more than one discipline, among them Gwendoline Louw who scooped a total of four awards in Italian and French studies. She also won a bursary from the French Embassy for a three-week stay in France in July this year to follow a cultural enrichment programme.

A regular feature at the prize-giving ceremonies is Richard Smith, a former UCT classics student and lecturer now with prize sponsors Deloitte & Touche. In addition to handing out class medals, Smith spoke on the importance of language and literature in all spheres of communication and business.