International Day of Persons with Disabilities: ‘It always seems impossible until it’s done’

Teenagers the world over will agree: entering your teen years is much like a rite of passage. It’s a steppingstone to young adulthood and many 12-year-olds eagerly anticipate their 13th birthday. It was no different for Benedict Leteane. But, in 1999, a few months after his 13th birthday, congenital glaucoma claimed his eyesight and changed the trajectory of his life forever.

Leteane, who’s currently completing his MPhil in Disability Studies at the University of Cape Town (UCT), developed the condition as an infant. Congenital glaucoma is a serious eye condition that is said to affect one in every 10 000 babies globally. The condition is very closely associated with glaucoma – a group of diseases where high fluid pressure in the eye damages the optic nerve. According to research, the disease affects children between birth and three years old.

Ahead of International Day of Persons with Disabilities on Saturday, 3 December, Leteane spoke to UCT News about his journey with congenital glaucoma, the obstacles in his path, and shared a few pearls of wisdom with persons with disabilities.

Adjusting to life without sight

When Leteane’s parents and grandparents first discovered that he had challenges with his vision, he was about five years old. And on a visit to an ophthalmologist’s rooms, he was diagnosed with congenital glaucoma. By then, the condition had rapidly developed and exacerbated, and sadly, it was irreversible. Leteane’s family was forced to come to terms with the harsh reality that one day their little boy would lose his vision completely.

“I was a toddler when doctors told my parents that there was nothing they could do about my congenital glaucoma; they had detected it too late.”

“I was a toddler when doctors told my parents that there was nothing they could do about my congenital glaucoma; they had detected it too late. I had visual impediments for as long as I can remember. But I lost my sight completely when I was 13 years old,” he said. “As you can imagine, this is a critical age for any child. I had just entered that typical teenage phase where image was important, and my self-awareness levels were very high. It was very, very difficult for me to adapt.”

But Leteane was forced to adjust. He gradually adapted to a special school for visually impaired learners and even got used to using a white cane – a device used by many blind or visual impaired individuals to help them scan their surroundings for obstacles and orientation marks. He was determined to nurture his can-do mindset, which he adopted at a young age. Suddenly it was more important than ever before. His can-do mindset meant that he pushed himself to engage in everyday activities like washing the dishes and tidying his bedroom, under the supervision of his parents, grandparents and their housekeeper, of course. But for Leteane, no task was impossible to conquer.

A star at school

Leteane enjoyed school and performed very well academically. Good grades were a prerequisite for university, and he was determined to secure his entry into a tertiary institution. And he did just that. Once he completed his matric in his hometown of Welkom in the Free State, he made his way to Cape Town to pursue his undergraduate degree in psychology at the University of the Western Cape (UWC). The first few months at UWC were sad and lonely – the worst time of his life, but that soon changed.

“It was hard, I won’t lie. I was a long distance from home and away from the only support structure I ever knew. Yes, I chose to go to UWC to be far from my family just to test my independence, but that didn’t make it any easier,” he said. “I was so scared of the way others perceived me and what I sounded like to my peers. I was terrified to answer questions in class in case people thought: ‘That blind boy is stupid’. When I found my voice in the second semester of my first year, all my fears vanished. I was like any other student. There was no stopping me.”

Leteane’s love for academia blossomed, and after he completed his undergraduate degree and his honours in social development at UWC, he made the not-so-difficult decision to enrol for a postgraduate diploma in disability studies at UCT in 2017. The new, unfamiliar environment meant a list of new challenges. Travelling to and from campus via the bustling main road to his home in Muizenberg was especially tough. Luckily, asking for help came naturally for Leteane, even if it meant approaching a stranger on the sidewalk to stop a bus on his behalf. He said UCT’s Disability Service unit was a godsend and played an integral part with helping him familiarise himself with the campus environment, getting around campus and settling into his new academic programme.

“It’s been years now and every day I’m grateful for their care, compassion and their generosity.”

“Disability Service really helped me on my way – from those early days when I first arrived at UCT until now as a master’s student. It’s been years now and every day I’m grateful for their care, compassion and their generosity. They genuinely want to see students with disabilities succeed,” he said. “Not once have I felt inadequate.”

Leteane was well prepared for life as a postgraduate student and easily adjusted to UCT. However, he explained, he experienced several challenges with accessing Vula – the university’s former online learning system – remotely. This was especially tricky when he needed to complete tasks and assignments at home. But he navigated this bump in the road thanks to several helpful notetakers in the Disability Service unit. And when the time came, nothing stopped him from enrolling for his master’s.

“My master’s felt like the most natural choice. I love the world of academia and I wanted to push myself to continue this postgraduate journey. I’ve not looked back; it’s been incredible – the opportunity to learn [and] discovering new things about myself. I have grown by leaps and bounds,” he said.

In 2022 as Leteane was preparing to wrap up his master’s thesis, which focuses on how educators in special needs schools perceive inclusive education, his role at UCT came full circle. A job opportunity as a trainee learning designer at UCT’s Centre for Innovation in Learning and Teaching (CILT) became available; Leteane applied and was thrilled when his application was successful. In a nutshell, he said, his role focuses on curriculum design and coming up with ways to ensure that UCT’s new online learning system, Amathuba, is user friendly and aptly fits the needs of all students, including students with disabilities.

“This is a very big deal for me because of the challenges I experienced with Vula when I first arrived at UCT. My work with CILT and on Amathuba focuses primarily on accessibility and inclusion for persons with disabilities and to ensure that no student is left behind because of their disability,” he said. “I am very excited about this opportunity and to make a meaningful contribution in our students’ lives, especially those with disabilities.”

Ahead of International Disability Awareness Day, Leteane encouraged persons with disabilities to put their fears of inadequacy aside and to take the first step towards achieving their dreams – whether that be to enrol into a university or college programme; to participate in a sport; or find a part-time job. Ultimately, he added. “It’s in our hands.”

“If we don’t take the first step, no one will do it for us. It won’t be easy; it will be very difficult. But perseverance and determination are so important, and as Madiba once said: ‘It always seems impossible until it’s done’. All you require is faith and hope to get you to where you really want to be. I’m an example of that,” he said. 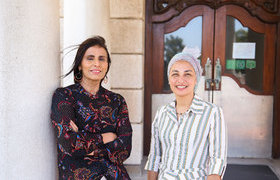 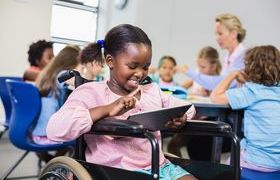 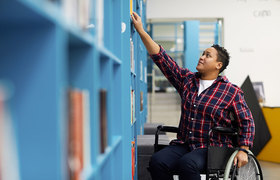 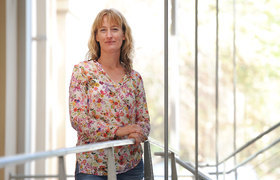