Fifty‑two years before Jan van Riebeeck landed at the Cape on 6 April 1652, Cape Town was a proto-port; a calling place for hundreds of outward and inbound ships between Europe and the East Indies. These maritime visitors also met and bartered with the resident Khoi, who were guardians of the Camissa (‘sweet water’) River flowing into Table Bay.

Contrary to the colonial history taught at schools and beyond, European visits and trading at the Cape did not begin with Van Riebeeck’s arrival. Many cultures and nations visited the Cape before 1652, said heritage activist and former UCT staffer Patric Tariq Mellet. Mellet was delivering a Winter School webinar, hosted by the University of Cape Town’s (UCT) Centre for Extra-Mural Studies. It was the first of two he delivered on the Cape’s early history in the Winter School series.

Mellet was born in District Six and is a veteran of the liberation and trade union movements, and an avid researcher of South African and Cape history; the latter bound up with indigenous peoples’ history over the last 2 200 years, and the history of slavery since the 17th century.

The famous Charles Bell painting of Van Riebeeck’s landing and meeting with the awestruck local Khoi people – who had supposedly never seen white men before – was painted 200 years after the event, and represents the skewed narrative that has become embedded in South African minds, said Mellet.

“It was not terra nullius, or ‘nobody’s land’, on the arrival of the Europeans,” he said.

Much of the material for his webinar came from Mellet’s book, The Lie of 1652: a decolonised history of land. This contends that from 1600 to 1652 there was vibrant, multicultural interaction at the refreshment station and proto-port settlement that would become Cape Town, centre of a colony run by the Dutch East India Company (the Vereenigde Oostindische Compagnie, or VOC).

Mellet also described how the local Khoi people played a vital role in the establishment of the proto‑port. They could also lay claim to the shoreline frontier where they had settled more than half a century before the arrival of the Dutch colonists, trading with ships at the mouth of the Camissa River, he said.

It was while reading Robin Knox-Johnson’s maritime history (in 1969, Knox-Johnson became the first person to complete a single‑handed, non‑stop circumnavigation of the globe) that Mellet found a number that was to shape his research for years afterwards. 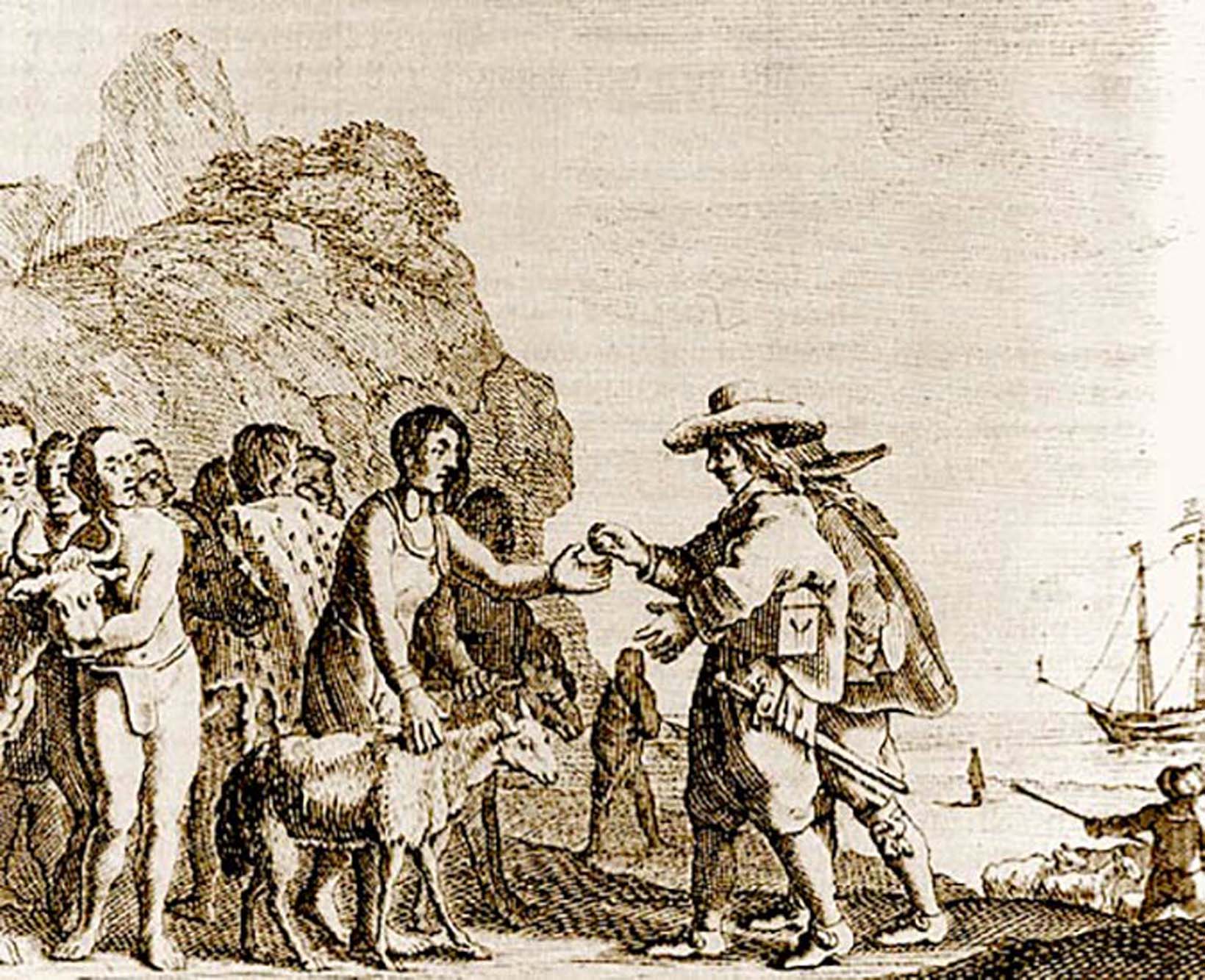 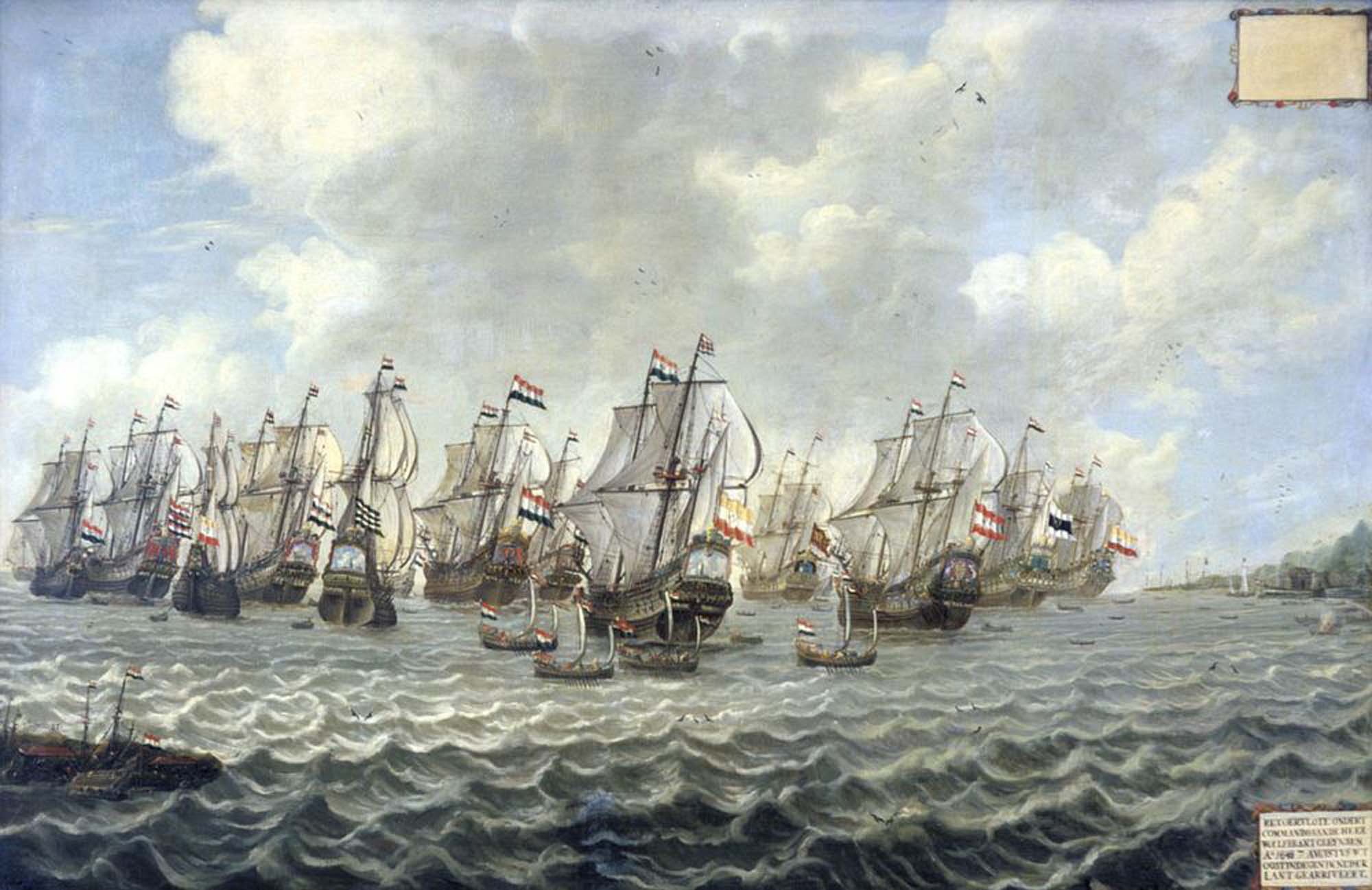 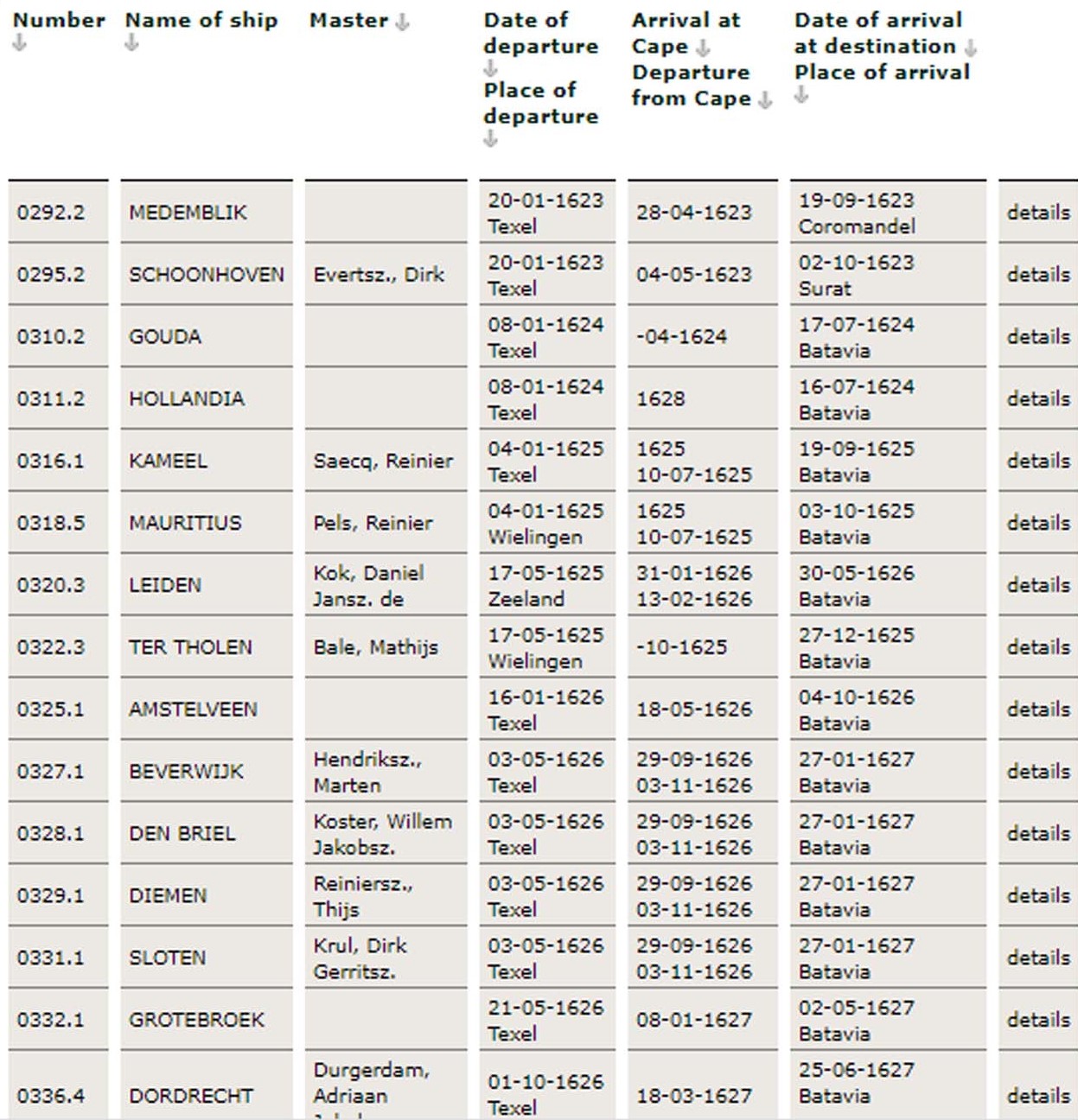 (1) The Khoi traders, trading with Europeans (National Library of South Africa); (2) The Dutch fleet of 12 vessels in 1647 before returning from Batavia that stopped at Table Bay. (Unknown artist); (3) One page of the Huygens Database showing the ship logs record of stopovers at Table Bay. (Dutch Asiatic Shipping database, The Huygens Institute for Netherlands History).

Working with the Huygens Institute for the History of the Netherlands database of all Dutch East India Company shipping between the Netherlands and Asia from 1595 to 1795Mellet found that their database recorded 8 500 ships having sailed from the Netherlands to Asia in that period. He also tapped the work of two world‑renowned maritime historians at Leiden University in the Netherlands, Professor Femme Simon Gaastra and Professor Jacobus Ruurd ‘Jaap’ Bruijn. They had charted not only the Dutch ships that travelled to Asia via the Cape, but French, British, Portuguese and Danish ships too.

“The Huygens database shows 995 ships for Dutch shipping alone that went to Asia and back to the Netherlands along the Cape sea route between 1600 and 1652 of which only 34 could be verified as not stopping at the Cape,” said Mellet.

“The database is a work in progress, transcribing logbooks, where 261 Dutch ships in this period have already been verified as having stopped over at Table Bay – with twice as many more likely to have done so, as only 10% of the work is completed.”

He added, “Gaastra and Bruijn show a further 416 European ships of four other nations stopping at Table Bay too. They further show that ships stopped at the Cape throughout the year and not only during two six‑week periods, as previously thought.”

The researchers also provided more detail on the numbers of people on those ships, the nature of the passengers (although the ships flew European flags, the crews comprised Africans, Indians and South-east Asians, and Arab navigators) and the produce that was carried.

“The ships also carried enslaved persons,” said Mellet. “Using Gaastra and Bruijn’s tables of figures it can be ascertained that conservatively, 120 000 verifiable travellers came to Table Bay in this period, and we could extrapolate the possibility that up to twice that number may emerge from further assessments.”

“So the indigenous people at the time of Van Riebeeck’s arrival certainly were not startled, and certainly had a lot of experience of Europeans.”

There was also information on which and how many ships stopped over at the Cape, and for how long; the average stopovers being 24 days, according to ships’ logs. This had implications for early encounters and bartering with the indigenous people who occupied the land at the Cape.

Mellet added, “Besides this sea traffic, we know of at least two shipwrecks: the Mauritius Eiland in 1644 with 240 survivors who stayed in Table Bay for four months, and another in 1647, when 90 survivors spent more than a year at the Cape. So the indigenous people at the time of Van Riebeeck’s arrival certainly were not startled, and certainly had a lot of experience of Europeans who had come in the 52 years before. “

The greatest impact of these meetings between the seafarers and the indigenous people was the introduction of new forms of trading with the visitors, as well as other ‘port’ facilitation activities. This huge visitation and interaction impacted on the local economy and the region’s social development, said Mellet. Cape Town was indeed already an evolving proto-port before Van Riebeeck’s arrival.

Here Mellet cites Professor Sarah Palmer of the Greenwich Maritime Institute, who studied early ports, between 1500 and 1750. These had their genesis as places where trade activity was located either on the shore of a major river (such as the Camissa) or on the sea.

Professor Palmer said: “The operation of a port was, and is, never to be wholly comprehended within the confines of the dock wall or the perimeter fence. Ports are not only interfaces between land and water; they are, or have been, points of interaction between cultures and peoples. But above all, they are places; places have history, and the past of a place affects its present. For ports, in short, history matters.”

Catia Antunes, Professor of History of Global Economic Networks at the Institute for History at Leiden University, defines proto ports as gateways for the exchange of goods, people and ideas, as bridges between different peoples and cultures, and as settlements of people engaging as interlocutors between vessels and people and suppliers in the hinterland or the interior.

It was these definitions that urged Mellet to explore Cape Town’s early history as a proto-port.

“Many colonial historians dispute that the Khoi people had engaged in trade with ships, or that they boarded ships in the trading process.”

The other fact Mellet weaves into this new heritage tapestry is that the Khoi – Autshumao’s people – had settled along the Camissa River; and when Van Riebeeck arrived and was instructed to build a fort at the river’s mouth, he was essentially taking over that water resource.

“They [the Khoi] preferred to call themselves the ‘watermans’, the water people or the ǁAmmaqua; in other words, the guardians of this vital resource,” said Mellet.

They were there all along. Mellet quotes a journal entry from Van Riebeeck, in his journal clearly stating that Autshumao (Herrie) “would insist that it was he who started the incipient trade”.

“Many colonial historians dispute that the Khoi people had engaged in trade with ships, or that they boarded ships in the trading process,” said Mellet.

But they did. Some travelled abroad, like Autshumao (to Java and back, in 1632), and Xhore, who travelled to London and back in 1613.

In presenting these perspectives (the webinar also presented other historical facts on the frontier wars), Mellet said he is keen to encourage scholars and the public to use this “disruptive set of perspectives” to further research and writing that will uncover many more hidden facts about the country’s past.

But it’s important to contextualise these facts, and a decolonisation perspective that emphasises restorative memory and its relationship to restorative justice, said Mellet. 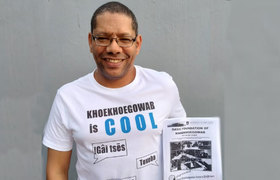