Serendipitous discovery leads scientists to new galaxies in the sky

A team of scientists representing three South African universities, including the University of Cape Town (UCT), were pleasantly surprised when their usual studies of the sky revealed a rather unusual find: 20 new, previously unidentified galaxies.

The serendipitous discovery was detected by members of the MeerKAT International GHz Tiered Extragalactic Exploration (MIGHTEE) project team. The team of scientists study the demographics, evolution and conditions of galaxies in a variety of environments. Their recent, ultra-cool discovery was made possible by the ingenuity of the MeerKAT telescope – the South African precursor telescope to the Square Kilometre Array (SKA).

“This is an exciting find and set our expectations high for the remainder of the survey.”

“This is an exciting find and set our expectations high for the remainder of the survey,” said Dr Bradley Frank, adjunct lecturer at UCT’s Department of Astronomy. “The discovery cements the leading role that UCT plays in many MeerKAT projects, which provide a rich environment for discoveries and research excellence to thrive.”

Dr Frank is also the associate director for astronomy operations at the Inter‑University Institute for Data Intensive Astronomy (IDIA), established as a partnership between the University of Pretoria, the University of the Western Cape, and UCT, in close collaboration with the South African Radio Astronomy Observatory. IDIA aims to build capacity and expertise in data‑intensive research in the higher education research community in the country, to grow a global leadership cohort on MeerKAT survey science projects and other large projects on SKA pathfinder telescopes.

The latest research was led by UCT alumna Shilpa Ranchod (who recently completed her MSc at the University of Pretoria). Part of the research team also included Wanga Mulaudzi, an MSc student at UCT’s Department of Astronomy. Mulaudzi’s research focuses on determining the rotational velocities of galaxies in a MIGHTEE HI (H one region) early science sample and formed an integral part of this study.

Frank and Mulaudzi shared more on their recent discovery with UCT News.

Niémah Davids (ND): What do we know about these galaxies and where were they found?

Bradley Frank (BF): We detected neutral hydrogen in 20 galaxies at a distance of 200 megaparsecs. These galaxies are members of a large galaxy group, one that is possibly in the early stages of assembly.

This discovery and the success of our survey were largely due to the university’s foresight and commitment to research excellence.

“The discovery and the success of our survey were largely due to the university’s foresight and commitment to research excellence.”

ND: How were these galaxies detected?

BF: The galaxies were discovered using the MeerKAT telescope. The observations were conducted as part of the MIGHTEE project’s early science campaign. We used IDIA’s ILIFU [which means “cloud” in isiXhosa] facility to complete the data‑intensive processing and imaging of the captured raw data. This process produced large 3D images, and we discovered the new galaxies in this group during the initial source finding. It’s always exciting to look for clues and to detect things for the first time. Our curiosity really paid off with this discovery.

ND: Tell us about the MIGHTEE project and how it’s connected to this discovery.

BF: With the MIGHTEE project, we survey several areas of the sky that have also been observed with other excellent telescopes at different wavelengths. We aim to study the evolution of galaxies, and radio observations usually allow us to study different physical processes by analysing different subsets or data combinations.

This early science data highlights the amazing capability of the MeerKAT telescope to help us discover new things and find answers to known unknowns.

ND: What’s unique about this find?

BF: These are gas‑rich galaxies huddled together in a galaxy group. Such galaxy groups are rare, and it’s even rarer to find these many detections in neutral hydrogen. So, it was an exciting and unexpected find for us, especially since the discovery was based on early science data, which surveys a fraction of our total area. On the one hand we were lucky, and on the other hand, this is exactly the sort of thing that we set out to find.

“This is exactly the sort of thing that we set out to find.”

ND: Tell us a bit about your role in this project.

BF: I am the co‑chair of the MIGHTEE working group and I manage the spectral line processing. I was also responsible for the special line imaging for this specific project, which used calibrated data to produce the image cubes for the scientific analysis.

The team’s research has also been accepted by the Monthly Notices of the Royal Astronomical Society – a leading peer review journal that covers research on astronomy and astrophysics. 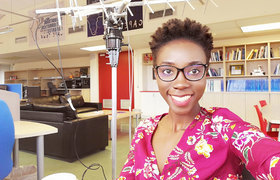