The University of Cape Town’s (UCT) School of Public Health and Family Medicine (SPHFM) has started a new health promotion campaign to raise awareness about the importance of early antenatal care, focusing on various communities around Cape Town. Working closely with the Western Cape Government’s Department of Health and several other stakeholders, the SPHFM kicked off their antenatal care programme with a successful community engagement session in Gugulethu.

Led by Professor Landon Myer, the director and head of SPHFM, the health promotion campaign is part of a larger project within the Division of Epidemiology and Biostatistics, and investigates the causes and effects of obesity during pregnancy.

“Early antenatal care is a huge issue in maternal and child health.”

“Early antenatal care is a huge issue in maternal and child health, particularly in low- and middle‑income countries, because many women may seek antenatal care a little bit later in pregnancy,” Professor Myer explained.

“So as part of our project, one of the things we want to do is get women into antenatal care as soon as possible in pregnancy.”

There are various reasons for the delays seen in seeking antenatal care, which include late detection of pregnancy and limited access to health services, as well as health services that historically focused on labour and delivery rather than the preventative aspects of antenatal care.

“One of the major outcomes that public health services are trying to achieve in South Africa is to ensure that women make their first antenatal care visit earlier, ideally in the first trimester,” said Myer.

Central to achieving this is making information about the benefits of early antenatal care more widely available to women and communities.

Raising awareness among women in the Klipfontein / Mitchells Plain district, starting off in Gugulethu, has therefore been the focus of SPHFM’s early antenatal care campaign. Health promoter Nobuntu Habe has been heading up these drives with the assistance of Phindi Zwane, who is currently completing her master’s in public health.

With the help of 15 volunteers – all women from Gugulethu – several successful community engagement sessions have taken place. These have included handing out flyers in malls, walking from door to door, and even working with a local daycare centre to send information packs home in learners’ schoolbags.

“As we went into communities, people were sharing their stories,” said Habe. “Some would even refer us to women they knew who were several months pregnant and had not yet been to a clinic.”

With these efforts proving successful, the team decided to officially launch the campaign on 11 June 2021 with a major engagement session at the Gugulethu Day Clinic in Lotus Park.

Working closely with their partners at the Western Cape Government’s Department of Health and their Communications Directorate, Habe and Zwane arranged an awareness drive that included several healthcare activations, as well as informative talks and entertainment.

“We set up different stations with a variety of health services,” said Zwane. “We had family planning, HIV testing, immunisation, and other well-baby care.”

On the day, volunteers were also sent into the community with loudhailers, specifically to invite women who suspected they might be pregnant to go to the clinic to be tested.

“The message was about booking early. They were saying slogans like ‘You missed a period? Go and have a pregnancy test’,” said Habe.

“Getting early and regular prenatal care can help you have a healthy pregnancy and a full‑term baby.”

Proceedings were officially opened by Professor Nomafrench Mbombo, Western Cape MEC for Health, who delivered a keynote address and shared her passion for maternal and child health.

“Getting early and regular prenatal care can help you have a healthy pregnancy and a full‑term baby,” she said. “Prenatal care is important during pregnancy, to monitor [your] health and the health of the baby.”

Professor Mbombo also expressed her gratitude to the UCT team for continuing to focus on other pressing public health issues amid the pandemic.

With the third wave of COVID-19 infections having hit Cape Town and lockdown Level 4 reinstated, community engagement sessions are momentarily on ice.

However, Habe and Zwane are still going full steam ahead with alternative communication drives.

They are currently working on a script for an advertisement set to air on Radio Zibonele, a community station based in Khayelitsha.

“We also have posters placed in different clinics and community centres,” said Habe. “And our volunteers are still distributing flyers twice a week.”

As soon as lockdown measures are relaxed, the phased rollout of engagement sessions will resume in different communities across Cape Town. 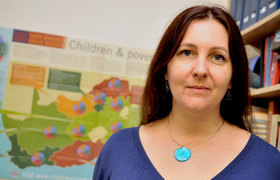 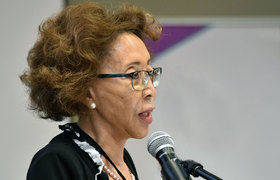 News
Malnutrition: ‘a slow violence against our children’ 22 Feb 2021
TOP