As I mentioned in a communication earlier this year, Professor Loretta Feris has indicated that she will not be seeking a second term as Deputy Vice-Chancellor (DVC): Transformation when her current term ends in December. She has since requested, and has been granted, sabbatical leave from 1 April 2021 until 31 January 2022. This effectively brings her term of office as DVC to an end today.

As we bid her farewell, I would like to acknowledge and honour Professor Feris for her contributions to the University of Cape Town (UCT). She took office at a particularly challenging time in higher education – just a year into the countrywide Fees Must Fall protests – and her term is ending a year after we began lockdown due to the COVID-19 pandemic. These two historic moments in the life of UCT and our country brought many profound complexities and challenges. Coupled with the additional demands of the portfolio, one has to admire Professor Feris for the way she led in these uncertain times, both as a DVC and as a member of the UCT executive.

As I reflect on Professor Feris’s many accomplishments over almost five years, I must begin with her commitment to transformation. In her own words: “Transformation at UCT is embedded in our core business of teaching, research and social responsiveness. We understand that an inclusive UCT is not an event, but it does require deliberate and sustained action.”

Professor Feris has always been committed to the task at hand. The deliberate and sustained action on Professor Feris’s part included overseeing the work of the Institutional Reconciliation and Transformation Commission; facilitating the Staff Inclusivity Survey; supporting the renaming of buildings, such as Sarah Baartman Hall and many others on our campus; introducing gender-neutral bathrooms; and introducing the gender-neutral title ‘Mx’ to UCT application forms. Her colleagues in the Department of Student Affairs in particular remember how she steered her team with great skill in leadership, political discretion and transparency.

Under her tenure, UCT made groundbreaking strides against sexual and gender-based violence, with the introduction of the new Sexual Misconduct Policy, the Disciplinary Procedures for Sexual Misconduct, the Specialised Tribunal for All Forms of Discrimination and Sexual Offences, as well as the online case reporting tool.

I would also like to recognise her for revising UCT’s Policy on Employment Equity and for the fast-tracking of our Student Mental Health Policy. Some of the improvements she steered in terms of the student-centred initiatives include the introduction of a 24-hour toll-free mental health helpline, the expansion of the Student Wellness Service, and increasing residence capacity through leased off-campus accommodation.

She served ably and tirelessly in various other roles, such as chairing the University Student Affairs Committee, the Transformation Forum, the Employment Equity Forum, the Rapid Response Task Team and the Special Executive Task Team.

As a member of the UCT executive, she led the university’s Sutherland Reburials Project, guiding the process whereby UCT set out to correct past wrongs and offer restorative justice to the families of individuals whose remains were found to have been unethically donated to the university in the 1920s. This process set a possible precedent for national policy around unethically obtained human remains.

Professor Feris has led with dedication, innovation and empathy. On behalf of the UCT community, I thank her for serving the institution with such expertise and care, and for her sustained effort as a member of the executive team and for supporting me in my role as vice-chancellor. Her time in this role and her commitment and effort have significantly improved transformation efforts, our commitment to social justice and student affairs across our institution. We wish her everything of the best in her future.

Emeritus Professor Hall is a historical archaeologist whose scholarship has focused on colonialism, heritage and representations of the past. Over the years his work has expanded into education, social and economic transformation and digital futures.

When he left UCT in 2008 to take up a position as vice-chancellor of the University of Salford in the United Kingdom (a position he held from 2009 to 2014), he was appointed emeritus professor at the UCT Graduate School of Business, and he has kept his involvement with UCT active to date.

As DVC at UCT he worked in five primary portfolio areas: policy development, planning, development and fundraising, HIV and AIDS, and institutional transformation.

Emeritus Professor Hall is qualified in alternative dispute resolution and provides advice and services for organisations undergoing change. He is well known as a courageous transformational leader and a strong intellectual who showed strong commitment to transformation while DVC at UCT.

Once again I would like to thank Professor Feris for all of her work as a member of the UCT executive. She demonstrated how the work of a dedicated individual builds the quality of the team, which in turn can shape the direction of the university and even the nation. 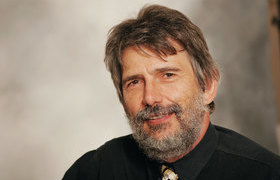