University of Cape Town (UCT) PhD researcher in chemical engineering Chelsea Tucker was recently named one of 10 Emerging Talent winners in the international Falling Walls Lab competition. Her entry, “Breaking the wall of energy insecurity in Africa”, is based on the Decentralised Diesel system she designed for her PhD.

Falling Walls Lab is an international forum for outstanding young innovators and creative thinkers in science, technology, medicine and other fields. The link is to the Berlin Wall, which fell in 1989 after separating East and West Berlin for nearly 28 years. The platform allows young innovators to introduce their “breaking walls” ideas to the public.

“As a researcher, it’s a profound experience to have a project you care so much about spark the interest of a global audience.”

Tucker’s modular, off-grid waste-to-fuel Decentralised Diesel system produces diesel and electricity from organic waste: food waste, farm waste and even sewage. This means that off-grid communities can use their own unwanted waste to generate all their energy requirements, which is good news for remote, energy-scarce regions of sub-Saharan Africa and beyond.

“As a researcher, it’s a profound experience to have a project you care so much about spark the interest of a global audience,” Tucker said. “It was incredibly exciting to take the virtual stage with some of the top scientific minds from across the globe to showcase the hard work that has gone into the waste-to-fuel initiative and the Decentralised Diesel system.”

The project is part of the Waste to Fuel Initiative in UCT’s Institute for Catalysis Research. UCT’s Professor Eric van Steen is the South African head of research and Tucker the current research coordinator. Her project was also recently nominated for an IChemE Global Award.

The Waste to Fuel Initiative is a collaborative project with a research team across three continents that contributes to the development of modular technology to produce fuel from waste. The team consists of Professor Van Steen, Tucker, Ankur Bordoloi (India), Cristiane Barbieri Rodella (Brazil), Dean Barrett (South Africa, Brazil) as well as many incredible researchers, PhD and MSc students at UCT and the Indian Institute of Petroleum in Dehradun, India.

Tucker’s project offers a solution to two of the world’s most pressing issues: a glut of waste and a lack of energy in emerging economies.

“The Decentralised Diesel system is based on a typical gas-to-liquid design, but it’s differentiated by use of waste as a raw material, as well as a novel catalyst that speeds up the process and facilitates modularisation as well as a power plant that makes the process off grid,” Tucker said.

“The modularisation and simplification of the technology keep the system’s capital costs lower than typical large-scale plants,” she explained. “Modularisation also means that the plant doesn’t require significant infrastructure around it, so it can be built anywhere in the world – specifically in remote regions of Africa that do not have access to energy.”

With the climate change and fossil fuel crises, the UCT team is hoping this technology will become available in the next decade, but more resources are needed.

Burn down the house

Tucker’s creative thinking about the physical world was fostered at a young age. At eight, she raised her mother’s ire by blackening her bedroom ceiling. She’d been experimenting with candles to see which burnt longest – that was her first experiment for the Eskom Science Expo. But the die was cast. Other Eskom Science Expos saw her enter projects on leaking electricity and decarbonising chimneys.

“My father is an electrical engineer who taught me how to put together simple circuits from the age of 10. I always knew I wanted to be an engineer; I just wasn’t sure which field.”

At 14 Tucker joined the Shuttleworth Foundation’s HIP2B2 Brand Ambassador Programme and worked on a project to remove greenhouse gases from chimneys.

“That really sparked my interest in chemistry.”

Many expos later, she headed to UCT to study chemical engineering.

Tucker is keen that not only remote communities get to use this technology. As the waste-to-fuel initiative works on an entirely circular economy (everything thrown away gets recycled and reused), she hopes that the public will get behind waste recycling and separation, putting their organic waste aside for municipal pick up. This will take buy-in and collaboration.

“The idea is that waste would go to a local depot, where it is dropped into the local Decentralised Diesel system and converted to electricity (that will be used throughout the community) as well as diesel,” said Tucker.

“The diesel will have two functions. It can be sold to community members for their cars (at a competitive price in comparison to imported fuels), or it could enable backup electricity generation, and micro-grid systems functioning on solar or wind. This way, load-shedding becomes a distant memory.”

The long-term plan is to develop this system for commercialisation such that waste management and energy creation can both be done on a municipal level.

“This is not a foreign concept globally, but South Africa is quite behind. In India there are waste-to-energy plants set up across the country to give various communities access to low-carbon electricity.” 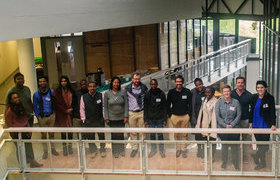