The University of Cape Town (UCT) has maintained its position in the 201–300 band in the latest ShanghaiRanking’s Academic Ranking of World Universities (ARWU) 2020, published on Saturday, 15 August.

The ARWU ranks more than 2 000 universities across six key indicators, publishing the best 1 000.

These indicators measure academic and research performance across individually weighted criteria, such as the number of alumni winning Nobel Prizes and Fields Medals (10%), staff winning Nobel Prizes and Fields Medals (20%), highly cited researchers (20%), papers published in Nature and Science (20%), papers indexed in the Science Citation Index Expanded and the Social Sciences Citation Index (20%) and the per capita academic performance of an institution (10%).

Only one UCT researcher is included in the highly cited researchers indicator score, a key factor in UCT’s overall ranking slipping to second place behind the University of the Witwatersrand, which has taken the top position in Africa.

A local and global snapshot

Harvard University continues to top the 2020 list for the 18th consecutive year, followed by Stanford University and the University of Cambridge respectively. 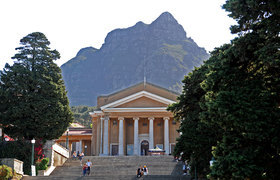