Moloi-Motsepe delivered the keynote address at a virtual celebratory Women’s Month event held on Thursday, 13 August, to celebrate women academics at the pinnacle of their fields at the university.

The event placed a spotlight on UCT’S For Womxn by Womxn research grant recipients. The grants are given to train postgraduates and postdoctoral fellows, with an emphasis on building capacity among black South African women and transgender researchers.

The scholarship was launched by Phakeng in 2018 to accelerate opportunities for women in academia.

“We are rising because humanity needs the resources women can bring.”

“We are not rising as women to make men fall. We are not rising in order to lower standards. We are rising because humanity needs the resources women can bring to help make a more just, equitable and sustainable world,” Phakeng said.

Grant recipients Dr Katye Altieri, Professor Floretta Boonzaier and Professor Janet Hapgood delivered brief updates on the status of their research projects, which focus on developing women in the field of oceanography, altering how the university conducts research on gender-based violence, and contraception and HIV risk for women in sub-Saharan Africa, respectively. Their updates also included presentations from their students.

Moloi-Motsepe commended UCT for doing well in promoting opportunities for women to excel in their areas of expertise and in leadership positions at the university.

“It is important that in our 25 years of democracy … universities anchor their advancement of women in policies and practices.”

“It is important that in our 25 years of democracy, and as we commemorate 64 years since the [women’s] march to the union buildings, that universities anchor their advancement of women in policies and practices.”

She told the audience that feminist scholars like Professor Amina Mama and others argue that patriarchal cultures are embedded in organisational or institutional cultures, which she said alienates and creates a “leaking pipe” that restricts women’s success.

These patriarchal cultures often undermine women’s knowledge and their research, and in many instances under-represent their value because of their limited views and voices in various fields.

“This has implied the need for universities to deliberate on the beneficial opportunities that would manifest if we fostered inclusive academic cultures and communities,” she said.

“That is why I want to draw attention to culture today and what it means to create inclusive institutions and communities.”

Sadly, she noted, only a few women in history have managed to attain success in their careers. While this is slowly changing across all sectors in society, it’s not happening fast enough.

In fact, she said, if sub-Saharan Africa continues on its current trajectory, the World Economic Forum reports that it will take roughly 95 years to close the gender gap.

Moloi-Motsepe, a qualified medical doctor, told the audience that at the beginning of her career she was forced to juggle her work and caring for her family. However, some of her role models in the field either opted not to have families to advance their careers or, if they had children, they were forced to make “difficult and painful trade-offs”.

“In order to flourish as an academic, specialist or expert in any career, it seemed to require deep personal sacrifice.”

“In order to flourish as an academic, specialist or expert in any career, it seemed to require deep personal sacrifice.”

Fast forward 30 years since then, she said that she is shocked that there still isn’t much support for women at institutional level during this make-or-break time in their careers.

“I think this is the reason we celebrate the women who overcome all the odds to achieve professional success.”

A drastic shift in thinking is necessary in order to move forward.

Moloi-Motsepe said the notion that childcare solely rests on the shoulders of women should be eradicated fast.

“This hinders a woman’s choices in life by making them choose between having a family or having a professional life. It also perpetuates stereotypes.”

“Creating inclusive spaces for men to embrace other facets of their identity could be a solution to gender-based violence as men and women become equal partners in their household.”

Moloi-Motsepe said more women need to advance in the fields of natural science, technology, engineering and mathematics. This will help diversify academia.

“In this new era, these fields are shaping our societies and playing a leading role in the global progress towards sustainable socio-economic goals.”

In doing so, the world will begin to shift and “traditional groupings” of countries as either developed or developing will be broken down. Instead, nations will be analysed for their creativity and innovativeness and how they solve the world’s most pressing challenges.

“My hope is that UCT continues to build on this culture of collaboration, where mentors and leaders nurture the ambitions of their students.”

“It would be impossible to create this new knowledge economy without an inclusive culture and [proper] support systems. My hope is that UCT continues to build on this culture of collaboration, where mentors and leaders nurture the ambitions of their students by recognising the unique challenges and circumstances they each face,” she said.

‘You are because of others’

In her first public address as chairperson of UCT’s Council, Babalwa Ngonyama said she is proud and honoured to be part of the team leading Africa’s best university.

Ngonyama lauded Phakeng for nudging women academics in the right direction. She also thanked her for encouraging women at UCT to adopt the bravery and determination of Rahima Moosa, Lilian Ngoyi, Helen Suzman, Sophia Williams-De Bruyn and thousands of other women marchers who descended on the union buildings on that iconic day in 1956.

“[By introducing these scholarships] the vice-chancellor is nudging us to adopt the bravery of those 1956 women and to rewrite the narrative and close those inequalities,” she said.

With the launch of the For Womxn by Womxn scholarships, Ngonyama said it helps UCT to rethink its views on gender in South Africa and provides new insights into “ourselves and others in different communities”. 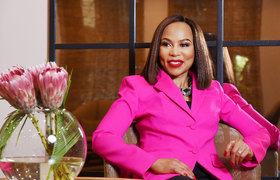