Avoid crowds with this app

Social distancing just got a little easier with the release of a new app that provides users with up-to-date, real-time information on how busy public locations are. The Crowd app is the brainchild of two University of Cape Town (UCT) alumni who hope to assist their fellow South Africans in these extremely uncertain times.

Creating an app that would help people save time by avoiding crowded places and long queues was something that Shannon Mark and Fergus Strangways-Dixon have been contemplating since 2018. The two Capetonians have been friends since school and both attended UCT – Mark graduating with a degree in finance in 2018 and Strangways-Dixon with an honours in computer science in 2019.

When the COVID-19 pandemic hit South African shores and the need to avoid crowded places became a necessity to curb the spread, the duo realised the app idea they’d been toying with could offer people some much-needed information.

Joining forces with Mark’s brother Jesse – who is currently completing his honours in computer science at UCT – and two other school friends, the team set to work on making the Crowd app a reality.

“We realised that this was the time to actually put in some hard work and get it out to the public.”

“We realised that this was the time to actually put in some hard work and get it out to the public,” said Mark. “Apart from being able to help people from a time-saving point of view, there’s also this added benefit of avoiding crowded spaces for the sake of everyone’s health and safety.”

Strangways-Dixon added that lockdown also created the perfect environment to bring their project to fruition.

“Since all of us either work or study during the day, we took advantage of those boring lockdown nights,” he said. “Since we couldn’t go out to see friends or [do] any of the things we’d normally do, we decided to strap into the desk and actually build this thing that we’ve been talking about [for] so long.”

Those long nights and hard work have certainly paid off: the Crowd app has received an overwhelmingly positive reception since its release on both Android and iOS in mid-July.

Requiring only about 8 MB, the app is light on data and quick to download. The launch page provides a heat map with a simple comparison of the current population density of stores in a specific area. With the user’s location marked on the map and the ability to filter by category, it is simple to find the least busy store in the vicinity. For those looking for a specific location, the search function assists by finding specific stores or businesses with the click of a button.

The anonymised population data is updated frequently to keep the information as current as possible. Crowd also provides an estimate of how busy stores or businesses are expected to be in one hours’ time. This helps users plan their shopping trips more efficiently.

“The feedback has been brilliant so far,” said Mark. “I mean, like with any business, we’ve received constructive criticism as well, which we really appreciate. It’s an app that’s so user-focused, so we actually rely on users to give us feedback to improve the product.”

Strangways-Dixon said that the app’s core technology – Flutter by Google – fortunately makes it easy to apply a single set of changes on both operating systems at once.

“You don’t have to spend a lot of time translating all your existing work from one platform to the other,” he explained. “That really helped us get a proof of concept out and also enables us to make improvements quickly and efficiently.”

Built on a solid foundation

Both the Mark brothers and Strangways-Dixon cite their time at UCT as having laid a solid foundation for the development of Crowd.

“In the computer science department, they really try to push you to help the community with your work – whether that’s commercial work or something like this where we’re releasing a free app. They push impact over profit,” said Strangways-Dixon.

This approach is clearly manifested in the app’s accessibility – the fact that it requires so little data to download and is also compatible on both state-of-the-art smartphones and their simpler counterparts.

“In the computer science department, they really try to push you to help the community with your work.”

Mark believes that the broad academic terrain covered in the BBusSc Finance degree has enabled him to work effectively as Crowd’s chief operating officer.

“The fact that it was such a broad course and covered so many different aspects has really given me a broader understanding of business in general,” he said.

Jesse, the person responsible for Crowd’s sleek branding and logo design, said that he gained all the skills he needed through various computer science app building projects over the past few years.

“The project management skills gained through the UCT app development projects have really helped in terms of how we’ve laid out our own team and each one’s responsibilities.”

With many additional features in the development stage, including the addition of new categories beyond the grocers and pharmacies currently available, the Crowd team says it looks forward to improving the app’s usability.

While COVID-19 has been the catalyst in the development of Crowd, its longevity stretches well beyond the pandemic.

“The plan has always been to continue past this. It’s always going to be important to know how busy places are. It’s just a fundamental thing to save people time,” said Mark. 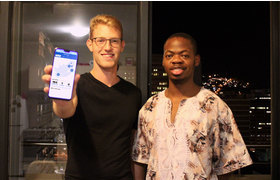