PhDs are always a mountain to climb, says marine scientist and University of Cape Town (UCT) alumnus Dr Jock Currie. But recreating a demersal fisheries survey, first undertaken along the Agulhas Bank 111 years ago, was ambitious, he admits. There were the small matters of finding an old trawler and weaving the manila hemp nets used back then.

Currie’s careful re-enactment of the past produced a rare snapshot of fisheries on the Agulhas Bank more than a century ago and how they compare today after decades of industrial fisheries and climate change. The results have been published in Frontiers in Marine Science.

Between 1897 and 1904, the Agulhas bank was surveyed by the government research fishing vessel, the SS Pieter Faure. Currie resurveyed three sites in 2015 using old-time fishing methods and reproductions of the original manila hemp trawl gear, a Granton otter trawl net. He found an old side trawler and refitted it with the net and flat wooden trawl doors of the kind used back then.

“One pundit described Currie’s thesis as a ‘masterclass in historical ecology’.”

One pundit described Currie’s thesis as a “masterclass in historical ecology”.

Comparative records using accurate historical baseline data are crucial to managing fisheries and ecosystems. Without a good picture of the past, there’s little context for comparison and interpretation.

History shows that the country’s commercial fisheries slowly began after the SS Pieter Faure reported significant catches along the coastline. The first steam trawler was registered in Simonstown in 1898. By 1922 as markets and networks expanded, 17 steam trawlers were registered in the province. The industry escalated after the Second World War.

The current chapter of the story begins when Currie’s PhD supervisor, Associate Professor Colin Attwood of marine ecology and fisheries in the Department of Biological Sciences, discovered and digitised a rare cache of historical fisheries data that included the 1897 to 1904 trawl survey.

Currie had just returned from working in the Seychelles and was employed to clean this historical data. Attwood said he’d planned to work with students on the juicier aspects of the data. This was Currie’s opening. Keen on a career in research, he knew he’d need a PhD. Attwood agreed to take him on as a doctoral candidate.

“When I came up with the idea of rebuilding the historical net and methods so that we could directly compare catches, Colin was enthusiastic and encouraging, rather than telling me I was crazy!”

It took careful interpretation of relevant literature and photographs to plan the design, dimensions, materials and methods of fishing. All these factors influence the fishing performance and catch because of the shape, size and behaviour of the fish netted.

Currie corresponded with Scottish museums and research institutions and even spent a few weeks at the Centre for Environment, Fisheries and Aquaculture Science in Lowestoft in the United Kingdom.

“They have an amazing institutional library and archive with lots of old reports, books and journal articles – anything vaguely related to fisheries and marine science. They also had a large warehouse of old (and not-so-old) research gear and there were shelves filled with old cruise reports, logbooks and maps from many local and global historical research trips.”

Design was one challenge; the making was another entirely. Here Currie was pointed to Noel Less, a legend in South African trawl circles. Less was leading Viking Fishing’s gear department – “essentially putting together all the trawling gear for all their vessels and making sure they fish optimally”.

“Noel has an incredible wealth of knowledge and experience and he very kindly shared a lot of his time and expertise with me. We even managed to get permission for him to come with us on our survey trips.”

“Manila use in fishing nets was phased out during the middle stages of the 20th century, replaced by synthetic ropes.”

He put Currie in touch with Mr Jacobsz at Cape Netting who took on the job.

“Manila use in fishing nets was phased out during the middle stages of the 20th century, replaced by synthetic ropes,” said Currie. “I remember Noel telling me he remembered some manila nets when he started as a young fisherman in the 1950s.” 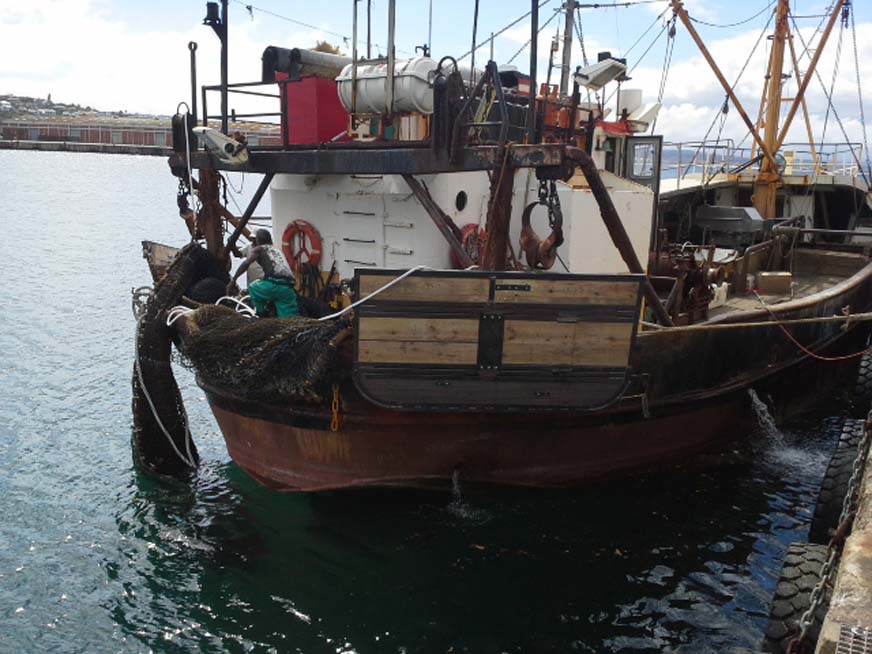 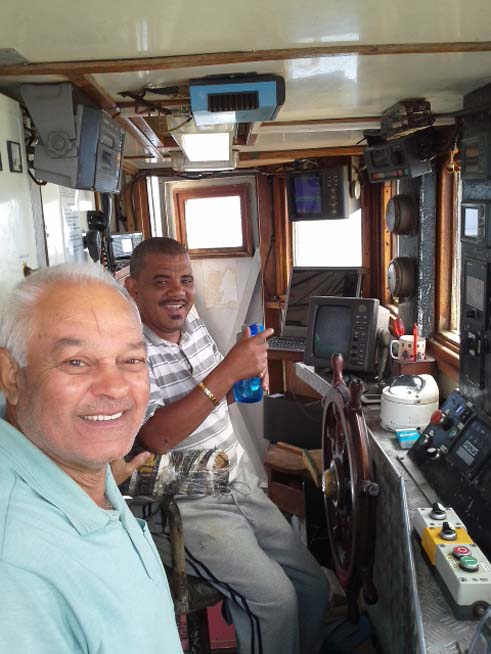 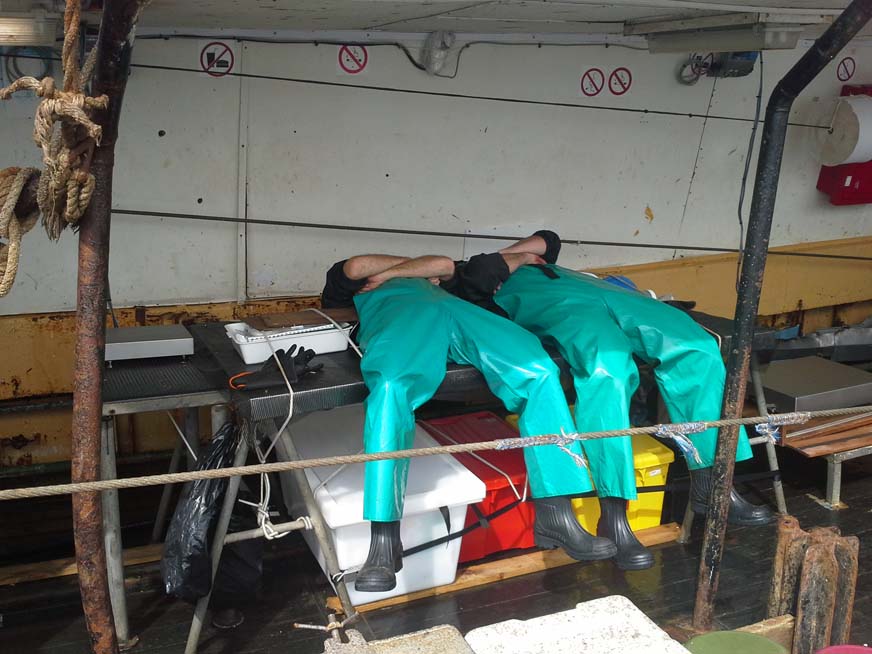 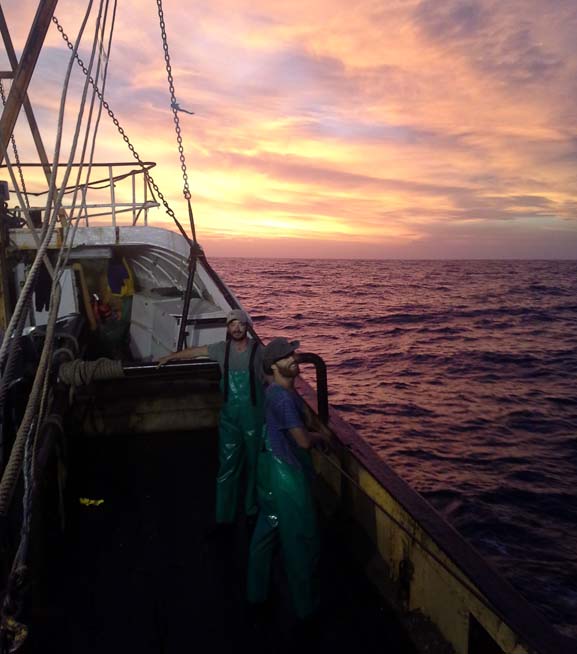 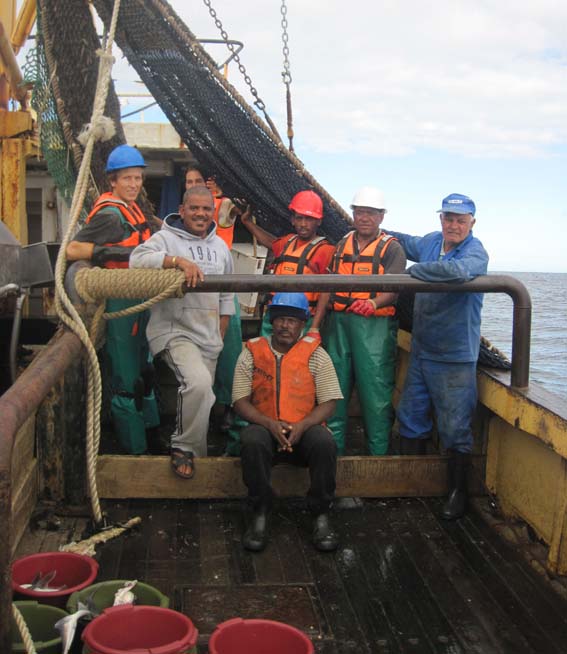 Various scenes from the recreated fishing trawl of 111 years ago and those who helped make it happen. Photos Supplied, Steve Lamberth.

It was Jacobsz and his team of “skilful hand-weaving ladies who graciously made our net panels for us, even though the manila was tough to work with”.

Finding an old side trawler was one thing, refitting it with the historical net and flat wooden “otter boards” was another. But Currie was a stickler for detail.

The trawls themselves were unforgettable, he said. He had little trawling experience and knew the nets would be heavy and clumsy and not as efficient as the modern gear.

“I was extremely thankful to have Noel with us on the vessel directing operations and I felt confident that if anyone could get the net to work, it would be him. Nonetheless, I was extremely nervous.”

Firstly, there was a fear that it would be a complete flop and that they wouldn’t manage to get the net to work. Secondly, Currie was nervous the net might snag and tear on a reef.

“We didn’t have funds to build another one, so all the chips were down. I was elated when Noel got it going and assured me that it was fishing as intended during the first day at sea. It felt like quite an achievement, but there was no time to celebrate as it was an intense few days of survey work!”

But Currie remembers the deep sense of satisfaction and pride as he arrived back in Cape Town, following the long drive from Mossel Bay after the first survey trip.

“I think that was when I realised that, just maybe, we’d actually pull off this audacious research project.”

Historical catches were dominated by kob, panga and east coast sole, which jointly contributed 70 to 84% of the catch. The same species made up only a minor component of modern assemblages. Instead, the resurvey catches were predominantly gurnards, Cape horse mackerel, spiny dogﬁsh, shallow-water hake and white sea catﬁsh, their total contribution rising to 85% from the historical 3%.

“These results suggest that a century of trawling may have altered seafloor habitats, indirectly contributing to changes in the ﬁsh community,” Currie said. “Historical assemblages included a substantial proportion of taxa that associate with reef habitats, whereas the resurvey assemblages were characterised by species that inhabit unconsolidated sediments or both reef and non-reef habitats.”

“One of the most startling facts is that over a century ago kob or kabeljou used to dominate these inshore ecosystems.”

One of the most startling facts is that over a century ago kob or kabeljou used to dominate these inshore ecosystems on the south coast.

“Most fishers and scientists alike would be surprised to hear that these were the most numerous fish caught in the historical trawls – over a quarter of catches on average – and that over 90% were 61 cm or longer in size. That is a phenomenal volume of large predatory fish supported by, and influencing, the local ecosystem.”

But their repeat survey yielded not even one, “even though we know they are still around in small numbers”.

Was it worth it?

The impact and legacy of the research will be revealed only over time.

There is one more paper Currie hopes to publish from the project and there are multiple follow-on investigations that could build on the same dataset for other students to pursue over time.

This project will set the scene. History produces shifting baselines; successive generational memory creep and there is a blurring of what was and what is ‘natural’, especially in the case of fish catches or life under water.

“There’s a tendency for people to assume that the natural world they grow up in is the ‘normal’ state. Most do not consider how transformed it may be from a few decades or centuries previously, before the human population and our industrial activities started treading so heavily on life-sustaining ecosystems.”

He added, “Appreciation for what the historical context or the real ‘natural’ state was, is an important consideration for assessments of ecosystems or species populations and should inform the reference levels we use when we discuss how we want to manage our biodiversity or natural resources. In the ocean, we frequently lack this historical context, more so than on land.”

A research project with formidable logistics needs a robust support network. Currie’s co-supervisors, Dr Lara Atkinson of the South African Environmental Observation Network and Dr Kerry Sink of the South African National Biodiversity Institute were as excited by the project and offered complementary skills and strengths.

“My support network was especially important during such a challenging project and luckily I had some amazing people around in terms of family, close friends and supervisors. At some stage I was so deep in and had spent so much effort and resources on it that I felt I couldn’t back out anymore!” 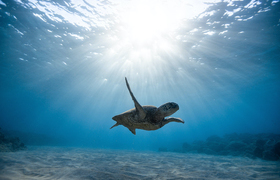 Research and innovation
The ocean’s genome: protecting and sharing it 08 Jun 2020 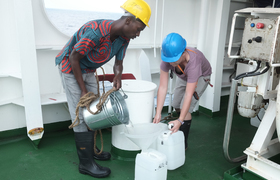 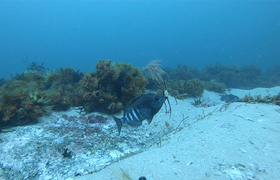