He’s usually a nondescript, greyish fella when he arrives at his chosen nesting site in False Bay. But watch his transformation as the spring breeding season approaches. He’ll slip into black nuptial dress, develop handsome white bands on his sides, and swim sideways just to show them off.

Irresistible. For a female steentjie looking for a guardian angel, that is.

“The change is mind-blowing,” said University of Cape Town (UCT) MSc student Nina Faure Beaulieu, whose thesis will examine the curious mating rituals of this ubiquitous little South African fish, just 20 to 30 cm long. It’s the first study of the species’ behaviour pre-, during and post-nesting.

The male steentjie is also charmingly fastidious. Before he starts courting, he’ll sweep the nesting site clean of sand, down to bare rock, using his fins. He’ll remove the brittle starfish, marine molluscs and other invertebrates to ensure the spot is pristine – and ready for lurve.

Once he’s bedazzled his mate (it’s those flashy stripes), lured her to the nest and fertilised her eggs, he’ll patrol the site constantly to guard and defend them until they hatch.

“They can’t be removed from the nest.”

Steentjies, also called sea bream (Spondyliosoma emarginatum), are not commercially caught, but as marine stocks shrink, that could change. Her study is important to future conservation efforts.

“But they’re so private that we know little else about their love life,” she said.

“The challenge of my MSc is to find out what steentjies get up to before, during and post-nesting and to learn more about their habits, habitat and protective behaviour.

“I hope that understanding their behaviour will help preserve their habitat and ecosystem. While they’re patrolling their nests, they’re very vulnerable as they’re not moving about to feed.”

Male steentjies begin exhibiting their mating behaviours in spring. But before considering this, it’s useful to know another curious fact: Steentjies are protogynous hermaphrodites. They begin life as females but become males as they grow. This feature exists in about five percent of animals (mostly fish and slugs) and plants.

The steentjies’ transformation is biological efficiency at work.

“Why waste all those early years when you’re too small to attract a mate as a male? You might as well make the most of your early years as a female, producing eggs instead.”

“Why waste all those early years when you’re too small to attract a mate as a male? You might as well make the most of your early years as a female, producing eggs instead. And steentjies got the memo,” she wrote in her blog.

UK-born and educated, Faure Beaulieu was looking abroad for an applied marine project.

“I wanted to be somewhere I could do fieldwork and see the systems I’m studying. I looked at Australia, New Zealand and South Africa – the one I really wanted – and UCT was the first to reply. Actually, I just wanted to attend a university at the sea.”

Her supervisor, Associate Professor Colin Attwood (Department of Biological Sciences), had an MSC project that seemed tailormade for her. But there was a proviso: The applicant needed scuba skills. Tick that box. Faure Beaulieu began diving at age 11 when her French mother immersed her in the Mediterranean with a mask and snorkel. She was hooked.

She and her diving buddies put down Baited Remote Underwater Video Systems (BRUVS), which showed plenty of steentjies swimming in and out of picture, becoming more and more banded towards spring, probably a temperature cue.

But nary a nest.

Then one afternoon, everything changed. As the last of the three buddy teams surfaced, one of the divers said: “Nina, I think we found your fish.”

“I hope that understanding their behaviour will help preserve their habitat and ecosystem. While they’re patrolling their nests, they’re very vulnerable as they’re not moving about to feed.”

It was an oasis of nests, from the size of dinner plates to bicycle wheels, off the coast of Glencairn, 14 metres down.

“I could not have hoped for a better site. The luck involved was just incredible.”

“I’ve tagged 32 nests at the site but there are more, 45 or so. It’s insane. There are so many it’s hard to keep track of everything.”

The cameras are yielding fascinating footage of life on the seabed, including an inquisitive octopus who tried to remove the waterproof cover of her camera on one site.

“When I arrive on site, I change the cameras. These last only two hours, so you get two to four hours of footage from a select number of nests. I also collect egg samples and take pictures.”

Here it’s useful to know that marine biologist Eugene Balon published a paper in 1975 classifying fish according to their reproductive behaviours and adaptations as a better way of understanding them. He divided fish into three categories: non-guarders, including fish that lay eggs in the water column; guarders, which are nest spawners; and bearers, fish that rear eggs on or within themselves, such as pregnant seahorses.

It’s vividly clear from her footage that steentjies are guarders, sweeping sand away and tossing out visitors such as brittle starfish, algae and sponges. At one nest, Faure Beaulieu’s nest tags were moved.

A recurring behaviour she noted was the steentjie picking up serpent-skinned brittle stars (Ophioderma wahlbergii) and swimming off with them to dump them far from the nest.

“It was fun to watch but interesting from an ecological perspective as brittle stars could well be egg predators. I want to understand which predators are attracted to the eggs, which ones make it and which ones the steentjies clear off.”

On one of the nests she placed a continuous camera, which runs for five minutes every hour from 08:00 to 18:00 for three to four days.

“I put this on a nest which had subsequently been abandoned; the eggs had all hatched. And you can see that the nest got completely overtaken by winkles, shells, etc. Two days before it had been a fully functional nest.”

Watching her footage is wholly absorbing.

In one section, the male steentjie can be seen luring a female to his nest, which he’s built over a week. And then something interesting happens.

Lurking just in view is a “lazy interloper”, another male steentjie hiding in the weeds until the moment the mating pair are releasing sperm and eggs. In a flash, he swims in, trying to cut between them to fertilise the eggs. Disturbed, the female swims off.

“It’s an evolutionary thing. He tries to dart between them and if he manages to fertilise the female’s eggs in a way that the male is unsure whether he fertilised the eggs or the other guy has, he’s going to keep defending the eggs until they hatch.

“He tries to dart between them and if he manages to fertilise the female’s eggs in a way that the male is unsure whether he fertilised the eggs or the other guy has.”

“So, the other male will have gotten away with not having built a nest, fertilising someone else’s eggs and getting his offspring reared by someone else. And he can go off and not put any energy in.”

Sneaky, but not rare among fish, said Beaulieu.

“The main thing is how does his behaviour change prior to eggs and during eggs? It’s understanding how much energy they use and how it changes during egg development. And the other part is on the nests themselves: how big are the nests, how far apart, what’s the sediment around them, what kind of algae and plants colonise the nest – the microhabitat is another whole part of it, which gives you an idea of how competitive the system is.

“We think they return to the same site each year, so it will be interesting to return next year and see if they reuse the same nesting area.”

She returns to the larger conservation issue and the steentjiesʼ vulnerability during nesting when they stay at their nests.

“Once the male is off the nest all the eggs will die so we need to make sure that nesting sites and nesting seasons are off-limits for steentjies.

“They’re just too easy to catch.” 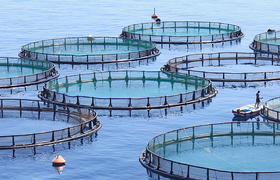 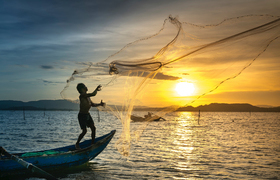 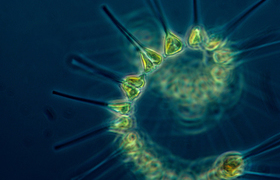 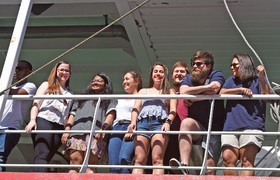