Political theorist and activist Ben Kies was one of modern South Africa’s most important political and intellectual figures, but his is not a household name. Looking to correct this is Emeritus Professor Crain Soudien.

The emeritus professor in Education and African Studies at the University of Cape Town (UCT), former deputy vice-chancellor and the Human Sciences Research Council’s chief executive made this “intervention in remembering” during his UCT Summer School lecture on 16 and 17 January.

In his lecture, Soudien focused on the public and political life of Kies “as he strode across the landscape of the South African liberation struggle from 1937, when he made his entry into politics, to 1979 when he passed on”.

Kies, a UCT alumnus, was part of a group of young, radical Cape Town intellectuals who questioned and challenged colonial authorities and made important contributions to social and political theory. He stood alongside a group of radical men and women who were also not household names in South Africa: Archie Mafeje, Kenny Jordaan, IB Tabata, Dora Taylor and Neville Alexander, to name a few.

“But even in the midst of these people, Kies stood out,” said Soudien.

The focus of Soudien’s lecture was Kies’s founding role in the New Era Fellowship (NEF) in 1937 and his instrumental role in the establishment of the Anti-Coloured Affairs Department (Anti-CAD) movement and the Non-European Unity Movement (NEUM) in the 1940s.

Equally important to Soudien’s analysis of “the public Ben, the Ben of ideas” were Kies’s three major lectures: “The background of segregation” (1943), “The basis of unity” (1945) and “The contribution of the non-European peoples to civilisation” (1953). In these lectures Kies spelled out his political theory and his positions of non-collaboration and non-racialism.

The life of Kies

In 1935 Kies enrolled at UCT, graduated with his BA in 1937, his MA in 1938 and his Bachelor of Education in 1939. After qualifying as a teacher, Kies accepted a position at Trafalgar High School in 1940 and, in 1946, was awarded a British Council scholarship and spent 18 months studying at the University of London.

During his time as a teacher, Kies met and married Helen Abrahams, a fellow teacher, a Trafalgar High School alum and a prominent member of the Teachers’ League of South Africa (TLSA).

In 1953 Kies applied for principalship at Trafalgar High School but was denied. In 1956 he was dismissed from the school and the teaching profession because of his “political activities”, which included his role as editor of the TLSA’s Education Journal. Kies was also a leading contributor to The Torch, the official organ of the NEUM, and the educational columnist for The Sun, writing under the pseudonym, IN Fandum.

Kies then began working for Juta and studied part-time towards his LLB. He was banned for the first time in 1959 and prohibited from attending any gathering in South Africa or the territory of South West Africa for five years.

In 1961 he graduated and was admitted as an advocate of the Supreme Court of Cape Town. He was issued with his second banning order in that same year. This time he was prohibited from participating and being a member of 36 named organisations. He also required permission from authorities to defend clients who appeared in courts outside of permitted jurisdictions.

Kies died in 1979, in a Hermanus court, while defending four men charged under the Terrorism Act.

Major milestones in Kies’s life included his instrumental role in the establishment of the NEF, Anti-CAD and the NEUM.

The NEF was an incubator for “an incredible new culture” in Cape Town. It began as an initiative of the Workers Party of South Africa – of which Kies was a member – and evolved, with the help from the young Cape radical, into an “intense intellectual space of study”.

Towards the end of the 1930s, NEF intellectuals assessed South Africa, concluding that they needed a political vehicle for formal organisation.

The opportunity arose in the early 1940s when the United Party proposed a Coloured Advisory Council (CAC), like the Native (later “African”) Advisory Council that was established in the mid-1930s. The Native Advisory Council, of which the African National Congress was a part, and the CAC evoked a great deal of resistance in this NEF political community and like-minded people. They argued that these were essentially sites for legitimating the disenfranchisement of people of colour. Out of this resistance came Anti-CAD, which stimulated a great deal of political activity in Cape Town.

“The background of segregation” is the first of three lectures Soudien presented to showcase Kies’s political theory, position and contributions. In it, Kies began to spell out the direction and strategy for the NEUM, which was founded in 1944.

The NEUM was driven by “an uncompromising humanism” – and rejected dominance in all its forms. This, said Soudien, required a level of self-awareness that was demanding and came to be known as non-collaboration.

“Our intelligentsia has sprung straight from the loins of the working class.”

Kies described the 1943 lecture to his colleagues as an attempt to present “a sober picture of the factors we are up against, and also to show clearly how we will have to face up to these realities”.

He said the “real united front” ─ as opposed to that emanating from the native and coloured advisory councils ─ cannot suddenly be called up or created; it must have a mass base. He also called for an analysis of the country’s leadership and argued that “practical leadership always came from the intelligentsia”, which provoked much argument and discussion.

Kies said that while non-European people did not have a “leisured class”, it certainly had an intelligentsia, one that “has sprung straight from the loins of the working class. They do not have to go to the people; they belong to the people; the people are all around it.”

This lecture led to what was called the Preliminary Unity Conference in December 1943 and the adoption of the “Ten Point Programme”, setting the stage for the establishment of the NEUM.

“The story and contribution of Ben Kies are inseparable from that of the Non-European Unity Movement,” said Soudien. “He was at the heart of the political debates and discussions that led to the development of its political agenda.”

Around the same time as the first lecture, writing as IN Fandum, Kies declared his position on race.

Responding to an accusation of “race pride”, Kies stated that he was not “sentimentally attached to any particular ethnic group of people”. Instead, the people to whom he belonged were “the workers and the peasants of the world”.

Most importantly, Kies argued that “no one has yet proved scientifically that there is such a thing as race”.

Soudien argued that this is “absolutely extraordinary” because Kies took this position while others inside the NEUM continued to use racial terms.

“Each group is always to think that its chains are different.”

Kies also made an argument about the purpose of race, saying its purpose is to “reduce us all to the same low level of slavery, to keep us segregated even in subjection”.

“Each group is always to think that its chains are different,” wrote Kies.

In 1945 he delivered his second major lecture, “The basis of unity”.

Key in this lecture was the idea that the political movement must take theory seriously. Political theory, he said, is how you sum up matters, where you consider the interests of the oppressed to lie, and this determines direction, demands and the types of organisations you admire, follow or join.

This, said Soudien, marked the movement of Kies’s thinking from the classroom to the political arena.

Civilisation and the non-European

Just under a decade later, in 1953, Kies delivered his seminal lecture, “The contribution of the non-European peoples to civilisation”. The focus of the lecture, said Soudien, was an “incredible provocation against the idea of Western civilisation”.

“It’s a really important piece of South African political literature. And it’s one of the most important … political statements which all of us … need to have a much better understanding of.”

Race, said Kies, was a rationalisation of colonial plunder and that “imperial conquest was offered as claim and proof of the inherent racial superiority of the conquerors”.

He also dismissed the idea that Europe had “proprietary rights” to the idea of civilisation; that they were the originators or inheritors of it. Civilisation, said Kies, was not a white thing.

The Cape radical went on to talk about the apartheid theorists, saying that “we, the so-called children of Ham”, DF Malan and Eric Lowe were derived from the same stock ─ Homo sapiens. Kies argued, before talk of DNA and genes, that they were indeed one biological species.

At the same time, Kies was also acutely aware of how even the politically progressive community was caught in the trap of the language of race. This lecture disrupted that argument.

“As this apartheid-type stuff is beginning to take form, not just ideologically, but in the texts, in the disciplines … you have this almost climax of eugenics coming out of South Africa [and] you have, simultaneously, this man talking in this completely contrasting way,” said Soudien.

Concluding his two-day lecture, Soudien reflected on the significance of Kies, his work and words for South Africa and the world today. Starting in 1941, Kies rejected race as a master signifier, as the “secret of the world” and the truth. It is, according to Kies, a lie.

This statement, said Soudien, challenges us to question how we make sense of ourselves. How do we begin to think of ourselves outside of this master signifier?

Furthermore, Kies stated that race is not this master signifier; he will not be defined by it. Instead, he stated, he was “something else” and it's what that something else is that Kies left contemporary South Africa and the world to grapple with.

“It’s a really powerful provocation which comes to work for thinking about patriarchy, gender, disability ... all these forms of difference, and beginning to put in front of us an argument that the self is a whole lot more,” said Soudien.

“[The self] owes its roundedness in much deeper understandings of what being human is all about, and it’s an incredible provocation.

“That’s what this man is all about.” 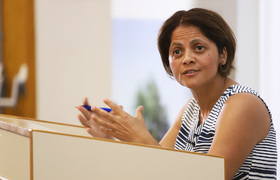 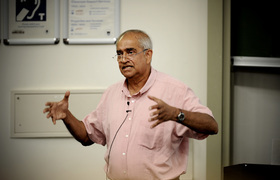 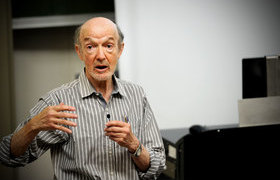