The University of Cape Town (UCT) Ladies football team saw off Cape Town Spurs WFC in one of the biggest women’s finals in the region, with a 2-0 victory that captain Nina Woermann described as an achievement “many of us had only dreamed of”.

The match, part of the South African Football Association (SAFA) Cape Town and Coca-Cola Peninsula Beverages Coca-Cola Cup tournament played at Athlone Stadium on 10 October, kicked off with a very nervous university side determined to go out there and do their best.

But just 43 seconds into the match Woermann put the ball into the back of their opposition’s net, following an early cross from teammate Michaela Liebenberg, in one of the fastest ever goals scored in a women’s Coca-Cola Cup final.

UCT’s defence proved solid throughout the first half, with the Spurs team unable to penetrate the home side’s backline except for one near goal which was saved by UCT’s intrepid goalkeeper Siba Sibabalo.

“They played with determination and discipline, and the talent they showed indicates that this victory is only the beginning for them.”

Coach Kamaal Sait said the team did UCT proud, and raised awareness about the high standard of women’s soccer.

“We hope to see them reach new heights and get the spotlight they deserve. They played with determination and discipline, and the talent they showed indicates that this victory is only the beginning for them.”

Woermann said the game was the first for them in a stadium like Athlone Stadium, and in front of such a large crowd.

“Winning such a big competition is an achievement many of us have only dreamed of, and being captain of the team that turned those dreams into reality was such a privilege,” she said. 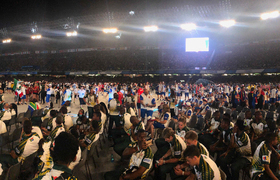