The first circumnavigation of the globe by the Spanish ship Victoria 500 years ago was akin to man landing on the moon. The repercussions of that historic voyage are still felt today in science, mathematics and astronomy, says University of Cape Town (UCT) scholar Dr Álvaro de la Cruz-Dombriz.

De la Cruz-Dombriz – of the Mathematics and Applied Mathematics Department, and senior lecturer in the UCT Cosmology and Gravity Group – was speaking at the opening of an exhibition to mark the quincentenary. The exhibition, “Elcano Crosses the Cape”, opened at the Castle of Good Hope on 12 June.

“The event is indeed linked to my [own] academic research, as the circumnavigation was a milestone, among others, in the scientific realisation of the roundness of [the] Earth and the use of Southern Hemisphere stars to navigate,” he explained.

The exhibition is a joint venture by the Iziko Castle of Good Hope, the SA Naval Museum, the South African Astronomical Observatory, the General Consulate of Spain in Cape Town and the Embassy of Spain in South Africa. De la Cruz-Dombriz is its co-organiser.

Round the world in three years

The 1519 to 1522 expedition that led to the historic milestone, led by Ferdinand Magellan and Juan Sebastián Elcano, passed through the Cape of Good Hope. Magellan was the Portuguese explorer who organised the Spanish expedition, although it was completed by Elcano, a Spaniard. The voyage’s primary aim was to find the passage of spices between Asia, America and Europe through the Pacific.

Making history was not their main intention when they set out for the East Indies in 1519, said Spanish historian Dr Ángel Tordesillas, who delivered the opening address. They had other things on their minds, commodities more precious than gold: spices.

“They had wanted to take control of the Eastern spices, and just happened to sail around the globe,” he said.

Vying with the Portuguese for the spice wealth of the East, and to avoid conflict, Spain agreed with Portugal to establish two zones of influence, under the bilateral Treaty of Tordesillas of 1494. The fleet that set out employed the best ships and navigation devices of the time: 23 navigation charts, 35 compasses, six pairs of compasses, 21 quadrants, seven astrolabes and 18 sandglasses, among other instruments.

Under the auspices of the Spanish Crown (Carlos I was on the throne), the trade expedition embarked from the river port of Seville: five ships and 250 men from 10 nations. Three years later, after a journey of 40 000 miles (64 400km), only one ship, the Victoria, and 18 men remained. One of the survivors was Elcano, who completed the round-the-world voyage after Magellan was killed during the Battle of Mactan in the Philippines in 1521.

“First, that America was a different continent from Asia; second, the existence of a southernmost pass in America; third, the character of the Pacific as an ocean, not a sea; and finally, the roundness of the Earth.

“The fact this expedition, just navigating west, returned to the same point, proved indeed the roundness of the Earth and helped to establish its diameter.”

“The latter could have been proved by indirect scientific measurements throughout human history,” he added.

“But the fact [that] this expedition, just navigating west, returned to the same point [from which it had started], proved indeed the roundness of the Earth, and helped to establish its diameter – much bigger than … it was thought to be before.”

Also, the expedition was instrumental in the use of Southern Hemisphere stars for navigation.

“The very famous Magellanic clouds – named after Magellan, to commemorate the expedition achievement – although known by several civilisations in Southern America and Africa, were unknown in the Western astronomical knowledge of the time.

“Thus, the expedition served to join knowledge of different parts of the globe. The exhibition displays an original Nicolas de Lacaille book dating back to 1763 (on loan from the South African Astronomical Observatory) showing how these clouds (indeed, two irregular dwarf galaxies) were since then depicted in the most important catalogues of astronomy – a research field which has become a national priority in South Africa.”

In summary, De la Cruz-Dombriz said the expedition had helped to integrate the Southern Hemisphere on an equal footing in the development of sciences in modern history, also beginning an epoch of transnational enterprises, global trade and exchange of human knowledge between four continents.

The exhibition runs at the Castle of Good Hope until 12 July, after which it will travel to Namibia. 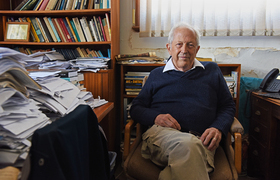