Triple Pulitzer Prize winner Edward Albee’s acclaimed and provocative play The Goat, or Who is Sylvia? opens at the Baxter’s Golden Arrow Studio on 24 April, and runs nightly until 18 May at 19:30, with matinees on Saturdays at 15:00.

The modern classic, which challenges taboos and moral judgements via a family whose lives spin out of control when the patriarch falls in love with a goat, is directed by Fleur du Cap Best New Director award-winner Mdu Kweyama (Reza de Wet’s Missing, Woza Albert!).

Albee, who according to the New York Times was “widely considered to be the foremost American playwright of his generation”, died last year aged 88.

The Goat, or Who is Sylvia? was written in 2000 and premiered on Broadway, New York two years later in March 2002. The play was so well received by theatregoers that it had a run of nine months, only closing that December.

Kweyama said tackling a play by one of Americaʼs greatest modern playwrights had been daunting.

“The play’s phenomenal success and the celebrated actors who have performed in it since it was first staged some 17 years ago are testament to its brilliance.

“The deeper I dig and as we unpack the work in rehearsals, the more I have come to realise just how complex and clever the writing really is,” he said, adding that he is grateful to be working with a formidable cast and excellent behind-the-scenes crew. 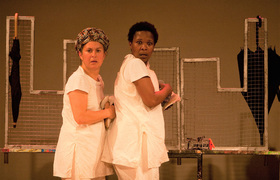