Jansen van Vuuren, a former lecturer at the University of Cape Town’s (UCT) Michaelis School of Fine Art, handpicked the images for the silks from paintings in the Irma Stern Museum, as well as from another private collection. The bespoke, limited-edition collection of scarves were opened by UCT Vice-Chancellor Professor Mamokgethi Phakeng last night.

“Today’s Stern on Silk exhibition is an opportunity to celebrate a dynamic woman and one of South Africa’s pre-eminent artists,” Phakeng said.

She told the audience that it was well known that she appreciates style and therefore felt “right at home next to these wonderful creations”.

“We have just celebrated International Women’s Day, and I dedicated the day to ‘Fearless Women,” Phakeng said. “In many ways Irma Stern is an example of a fearless woman. She was unafraid to challenge stereotypes.”

“In many ways Irma Stern is an example of a fearless woman. She was unafraid to challenge stereotypes.”

Stern should serve as an example to the youth, especially to young women, she added.

“Making your own decisions and leading a creative, adventurous and productive life [is attainable].”

Stern travelled widely across Africa and during her trips to Swaziland, Zanzibar and the Congo she engaged openly with people there. Phakeng said these conversations are reflected in her art and her collection of artefacts from across Africa.

“It is clear that she didn’t agree with those of her time who referred to Africa as the ‘dark continent’. She saw people as individuals and her work celebrates the illumination each African brings into the world.”

Jansen van Vuuren said scarves have become one of the most sought-after fashion accessories of the modern world, and described his choice of Stern’s artworks as fitting for his scarf designs.

“[But] to design a successful scarf doesn’t mean you select a painting and just plonk it on a square. It takes a lot of manoeuvring and readjusting to get the piece to fold into a poetic abstract form,” he said.

The scarves will be exhibited along with some of Stern’s paintings in her former studio at the museum on Cecil Road in Rosebank. The exhibition runs until the end of March and is open daily from Tuesdays to Fridays (10:00 to 17:00) and on Saturdays (10:00 to 14:00). 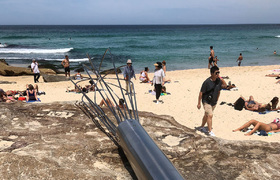 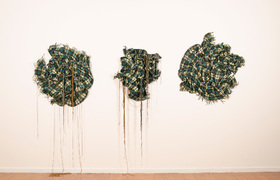