One of the most important artworks in UCT’s collection, the Sarah Baartman sculpture by Willie Bester, has been exhibited alongside a sound installation featuring a poem by Diana Ferrus, images and other artwork in an exhibition entitled Sarah ‘Saartjie’ Baartman, A Call to Respond.

The exhibition at the Ritchie Gallery on UCT’s Hiddingh campus is part of an ongoing process and dialogue about the display of artworks at the university, with the intention of creating a more open and inclusive space.

“Art is not just the beautiful things we put on walls and in various spaces, but they themselves are the intellectual discourse we are looking for,” Nomusa Makhubu, senior lecturer in art history at UCT’s Michaelis School of Fine Art, said during the opening of the exhibition on 20 September.

“This sculpture has become a very significant catalyst for that intellectual discourse, about a number of things, but also focusing on the narrative of Sarah Baartman.”

Made from steel objects welded together, the sculpture depicting Baartman has its own narrative. Bester had visited the Musée de l’Homme in Paris, where the plaster cast of her body, and separately, her skeleton, were displayed.

The sculpture, which UCT acquired in 2000, was initially located in the engineering section of the Chancellor Oppenheimer Library on upper campus.

“It was not only an inappropriate location, but a difficult sculpture to engage with and deal with,” said Makhubu.

Both the location of the sculpture and the emotional responses to it became very important, particularly during the Rhodes Must Fall and Fees Must Fall protests of 2015 and 2016.

During that time, black women students clothed the sculpture in a kanga and a headwrap to give Baartman her dignity. This provoked debates and evoked strong emotions.

“We have had to deal with an intricate and complex set of debates about whether it should be left robed, or the robes taken off,” said Makhubu.

Discussions were held with the university community. The outcome is the exhibition, put together by the Works of Art Committee (WOAC).

As well as the sculpture, images of the robed Baartman and texts that were pinned to the cloth wrapped around her body are on display. A piece authored by a collective of black women academics at UCT, under the banner of the BAC Womxn’s Collective, also forms part of the collection.

“The Works of Art Committee wants to point out that we recognise what happened to Sarah. We recognise the need to dignify her and commemorate her in more ways than one.”

Ferrusʼs poem, I’ve come to take you home, about the return of Baartmanʼs remains from the Musee de l’Homme to South Africa, plays alongside the artworks.

“With this sculpture and exhibition, the Works of Art Committee wants to point out that we recognise what happened to Sarah. We recognise the need to dignify her and commemorate her in more ways than one. This exhibition is part of that process,” said Makhubu.

“Sarah is an important figure. She represents not just the stories and experiences of women, particularly black women in South Africa, but also the point at which racism was legitimised through science. She lies at the core of the establishment of scientific racism.”

Koleka Putuma, who has made her name in South Africa and internationally through hard-hitting poetry, opened the exhibition with a powerful performance, articulating the pain to which black women are subjected.

The exhibition, which runs until October 4, has been designed as an expressive space and a place for thinking and reflecting. People are also free to write their own messages on a wall which forms part of the display.

Jay Pather, chair of the WOAC and director of the Institute for Creative Arts at UCT, said Bester was one of a few black artists to exhibit at the time. A shift is happening, albeit slowly.

“For many years there was a tradition of art at UCT where you took the works as a given. We want to go back to the moment when art was important, during the glorious 60s and 70s when protest arts and art was an expression of what people were feeling.

“It wasn't just decorative and not simply about commercial viability and assets, which is what art is increasingly becoming in a neo-liberal economy.”

While 80 percent of the work in UCT’s art collection is by white artists, Pather said the university is already starting to work on spaces such as the Molly Blackburn building and several public areas at the university.

“We are in the process of opening up spaces to allow discourse to bleed in and challenge the notion that the university is a place of simplistic object-driven spaces. It's a fluid space. We have to allow these discourses to give us glimpses of what it may look like in the future.

“We are in the process of opening up spaces to allow discourse to bleed in and challenge the notion that the university is a place of simplistic object-driven spaces.”

“We are starting to acquire work, change their representation and allow works to speak to each other in a generative way,” he said.

Pather added that there there is no shortage of art and artists, with some of the most prized artists coming from within the Michaelis School.

He called on both the university and wider community to go to the exhibition.

“We want the public to come with us and understand that we are about having an open space at the university … a space that is no longer reflective of an elite, but indeed hopefully a reflection of the aspirations and desires of the country.” 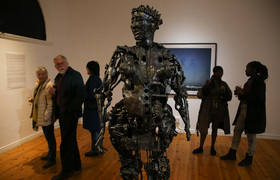