In recognition of Chris Hani’s contribution to South Africa’s democracy, and in commemoration of his life and legacy, UCT has renamed the New Science Lecture Theatre after the struggle veteran.

The renaming was celebrated at an event in the Molly Blackburn Hall on 24 April. The ceremony was attended by his daughter Lindiwe Hani and Deputy Minister of Public Works Jeremy Cronin, who spoke on behalf of the Hani family, together with special guest Justice Albie Sachs, members of the university and student leadership, representatives from the South African Communist Party (SACP), and UCT students and staff.

Speaking to the decisions to rename this and other buildings, rooms, open spaces and roads on the university campus, Advocate Norman Arendse, chair of the university’s Naming of Buildings Committee, asserted the value that names have, as well as their role in promoting UCT’s project of transformation and decolonisation.

In so doing, and in accordance with its Strategic Planning Framework 2016–2020, these renamings contribute to the forging of a new and inclusive identity at UCT.

The South African Studentsʼ Congress (SASCO) at UCT first proposed the renaming of the New Science Lecture Theatre in August 2014. It was approved by Council one year later.

The main motivation behind the proposal was that this was the last public venue where Hani had addressed an audience at UCT before he was assassinated in April 1993.

“Chris Hani embodied all that we have attempted to achieve until now, and that we wish to achieve going forward.”

Being permitted to rename one of its buildings after Hani plays a central role in building on the kind of legacy the university hopes to achieve, said Arendse.

“Chris Hani embodied all that we have attempted to achieve until now, and that we wish to achieve going forward,” he said.

This sentiment was echoed throughout the course of the evening, as speakers shared fond memories of Hani as a leader, fighter, scholar and friend.

Martin Thembisile Hani (his nom de guerre, Chris, was taken from one of his brothers) was born on 28 June 1942 in a rural village in Cofimvaba in the Transkei.

“As with so many South Africans across the generations, including the current young generation in our country, Chris’s first direct exposure to politics came, as it happens, on the terrain of educational struggles,” said Cronin, in delivering the keynote address on behalf of the Hani family.

“Names do matter. They are not everything. They are not a substitute for other things, but they do matter and they are there because people have struggled.”

In 1954, while Hani was completing his secondary education, a number of his teachers were fired for protesting against the introduction of Bantu education.

Reflecting on this in later life, Hani noted that Bantu education intended “to indoctrinate black pupils to accept and recognise the supremacy of the white man over the blacks, in all spheres. This angered and outraged us and paved the way for my own involvement in the struggle”.

This was the beginning of Hani’s lifetime of radical African nationalism.

But this nationalism was accompanied by a seemingly contradictory love of Latin, Greek and English literature, and a propensity to quote enthusiastically from Shakespeare.

“But the contradiction is only apparent. Because what he drew from the Western canon was a deep humanism,” said Cronin. As Hani himself noted, his studies of literature further strengthened his hatred of all forms of oppression, persecution and obscurantism.

Speaking of her father, Lindiwe Hani noted: “He was a soldier, but it was at a time that it was necessary to take arms. I think that he actually regarded himself more as an intellectual.”

“When Chris Hani engaged with people, he did not shout down from a podium.”

“Daddy was always very passionate about education,” she noted. “We didn’t hear nursery rhymes. We heard about Marxism and Shakespeare.”

Indeed, this is one of the qualities UCT considers in its renamings: selecting individuals who have been inspired by their academic education, and who have remained intellectuals throughout their lives, noted Vice-Chancellor Dr Max Price.

As many speakers pointed out, renaming, in isolation, does not a transformed institution make.

“Names do matter. They are not everything. They are not a substitute for other things, but they do matter and they are there because people have struggled,” asserted Sachs.

Cronin expressed similar sentiments when he said: “There are of course cynics who will say that changing the name of a building, or removing a statue, or whatever, changes nothing.

“They will be proved wrong if we embed this renaming within a wider process of social, economic, and cultural transformation, of our universities and our wider society.

“A university is surely a place in which it is both possible and imperative to foster reflective thinking, rational discussion, debate, which may be passionate, but must be collegial and civil in character.”

When Chris Hani engaged with people, he did not shout down from a podium. He engaged directly and personably, recalled Cronin.

“I hope that the … renamed lecture theatre, which now bears the name Chris Hani, will be an appropriate forum for collective empowerment, for rational and reflective discussion and learning. I trust, in short, that it will earn the name Chris Hani.” 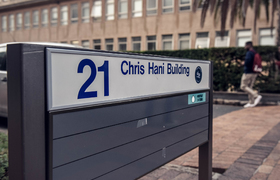 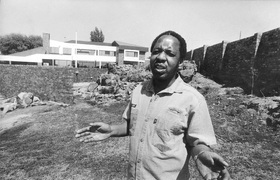