Gail Kelly is one of the world’s most influential businesswomen. She had a very successful run as the CEO of Westpac, the second-largest bank in Australia, from 2008 until her retirement in 2015. In 2014, she was listed by Forbes as the 56th most powerful woman in the world. She is also an adjunct professor at the University of New South Wales (UNSW).

Kelly completed a bachelor of arts degree and a higher diploma in education at UCT in the late 1970s. On Thursday, 24 August, she returned to her alma mater to bring a new opportunity for students in the Faculty of Commerce and at the UNSW Business School.

The Gail Kelly Global Leaders Scholarship will provide the opportunity for Australian and South African undergraduate students to be part of a transformative exchange programme between UNSW and UCT. The scholarship programme will be centred on the study of business and the exploration of a foreign economy and culture.

Vice-Chancellor Dr Max Price hosted a lunch in her honour at Glenara, which was attended by other members of staff, including Deputy Vice-Chancellor Professor Mamokgethi Phakeng and senior representatives from the Faculty of Commerce, the Development and Alumni Department and the International Academic Programmes Office (IAPO).

Kelly was accompanied on her visit by the dean of the UNSW Business School, Professor Chris Styles.

The first scholarships will be awarded in the second semester of 2018. 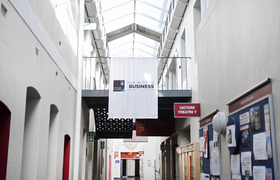