A pan-African approach to leadership

What could a South African human rights activist have in common with a Senegalese banker? A Ghanaian microfinance expert with a Tanzanian advocate? A Zambian chemical engineer with an Ethiopian journalist?

Dr Marianne Camerer, director of the Building Bridges programme at UCT's Graduate School of Development Policy and Practice (GSDPP), would tell you that the answer is a great deal. They are all making a difference in their communities and have a common commitment to Africa.

For two weeks in March, 26 emerging leaders gathered in Cape Town for the third annual Leading in Public Life Emerging African Leaders fellowship, hosted by the Building Bridges programme at the GSDPP. The programme's aim is to nurture a network of capable, ethical leaders in the public sphere that contribute to inclusive and engaged governance in order to address the 'big challenges' for development in Africa. Participants have the opportunity to engage with a range of public leaders, including former cabinet minister Trevor Manuel, Justice Albie Sachs, activist Pregs Govender and public intellectual Professor Achille Mbembe.

The programme has drawn inspiring emerging leaders from six African countries and a broad array of professions.

“Ironically, although the diversity in our group shows our differences, it ends up ultimately proving how similar we are,” observed Yoadan Shiferaw, an Ethiopian youth advocate.

“You wouldn't think it from reading the bios, but when you're actually in a room talking you suddenly realise just how similar the challenges are that we're experiencing in African public leadership.” – Meti Bekele

Meti Bekele, who works to improve educational engagement at the Ethiopian Academy of Sciences, agreed: “It's interesting: you wouldn't think it from reading the bios, but when you're actually in a room talking you suddenly realise just how similar the challenges are that we're experiencing in African public leadership.” 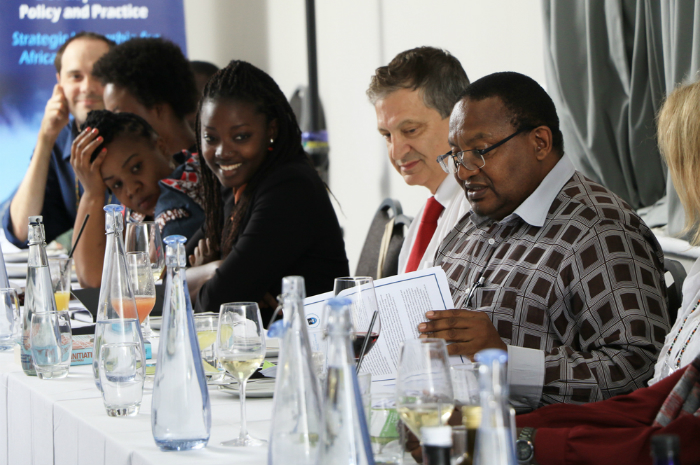 The GSDPP director, Alan Hirsch, and several programme fellows enjoy a remark by Vusi Pikoli at a programme dinner.

Award-winning author and medical doctor Maria Phalime has been facilitating the Emerging African Leaders Programme since its inception in 2015. She has been struck by the 2017 cohort's maturity and openness.

“The group is an absolute powerhouse. Interestingly with this group, there was a lot of realness from day one: their willingness to be vulnerable and open from the get-go impressed me deeply.”

Noting the 2017 cohort's ability to provide a supportive and open environment for participatory reflection, Phalime observed, “It's interesting: to what extent that dynamic can be attributed to the critical mass of strong female leaders we've gathered in the room? Women feel confident contributing because they are supported by a strong peer group.”

This year, 19 of the 26 participants are women – an overwhelming majority.

“This dynamic has ensured that fundamentally important topics around gender are taking centre stage,” observed Camerer. “Beyond overt sexism in often patriarchal work environments, it's brought up other considerations like ageism, marital status and imposter syndrome that all too often remain marginal concerns in leadership discussions.”

The GSDPP supports emerging African leaders in a variety of meaningful ways. These include custom designed executive short courses for mid-career professionals in government and civil society, as well as their cutting edge MPhil in development policy and practice at UCT, where development was recently co-ranked ninth in the world with Stanford.