They're almost as old as the planet itself – and they have secrets to share.

It turns out that diamonds are much older than once thought. We always knew they were millions of years old, the same age as the kimberlite rock (named for the South African town) in which they are found. In fact, diamonds are closer to three billion years old. To put that in perspective, consider that the planet itself is 4.5 billion years old.

According to Professor Steve Richardson, a geochemist at UCT, “The largest diamonds come from cratons (continental root zones), the ancient continental nuclei, with deep mantle roots or keels. Cratons contain the oldest rocks on the planet, and their buoyant keels extend more than 200km into the mantle; where pressures are sufficiently high, but temperatures sufficiently low, for diamonds to form and be stored for billions of years.” It is the combination of these immense forces that slowly turned carbon into the crystalline structure that today we see on engagement rings. Seems De Beers didn't know how right they were when their advertising company coined the phrase 'A diamond is forever'.

Though diamonds were once found mostly in small numbers along rivers, they are now mined in far greater quantities in kimberlite rock deposits. These volcanic deposits, which can measure hundreds of metres in diameter, are in effect giant funnels of diamond-rich rock that taper off at the deep end.

Richardson explains that diamonds are also accidental travellers to the surface. “Diamonds are not formed in the rare volcanic kimberlite rock in which they are found when they reach the surface. They are actually formed in the Earth's mantle, typically in the root zones of the continents. When the liquid kimberlite magma rises to the surface during volcanic eruptions, it samples the rock through which it travels – and the diamonds come along for the ride.” 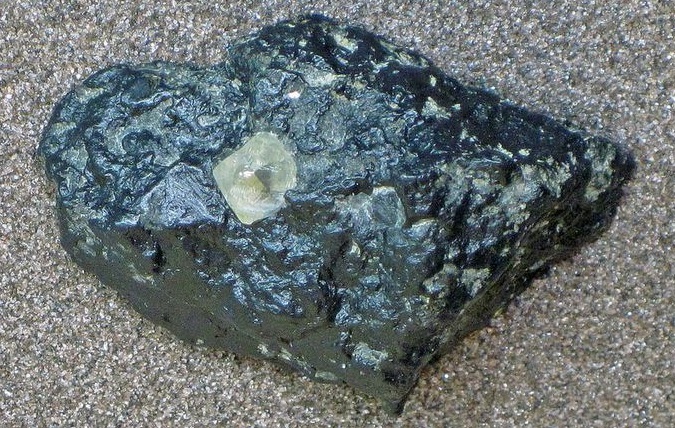 When early miners in Kimberley found pieces of kimberlite, they knew that the rock contained diamonds; but getting the diamonds out of the rock was no easy task. So the miners would let the weather do the work for them. Kimberlite weathers quickly by rock standards, so the miners would leave it strewn out in the veld where it would be pummelled by rain and wind; then, months later, they would return to pick out the diamonds. This is important, because in the eyes of science, the kimberlite (and the chunks of mantle rock it contains other than diamonds) is almost as precious as the diamonds themselves. These mantle rocks can tell geologists a great deal about what went on billions of years ago and hundreds of kilometres below the surface of our planet.

When it comes to looking back in time to the earliest history of the continents, it turns out that a diamond is a scientist's best friend. The reason for this, ironically, is not the diamond itself but its flaws, or inclusions. These inclusions are tiny fragments of other minerals that became encased within the structure of the diamond as it was formed. Not good for statement jewellery, but very good for studying how and when the continents themselves were formed.

Because of the way they are formed, diamonds are near-perfect time capsules, preserving the tiny fragments of purple garnet, pyroxene and olivine that tell scientists such as Richardson about the composition of the Earth's mantle, and about the age of the continents themselves. “These inclusions are themselves very rare,” Richardson says. “Occasionally we find one stone that has all three kinds of inclusion; and in our eyes, that is a true treasure trove.”

'Messengers from the Mantle' exhibition For the last 50 years the UCT Geology Department, and Emeritus Professor John Gurney in particular, have been adding to the collection of mantle rocks that began in the 60s. Since the earliest diamond mining of kimberlite rock occurred in South Africa, and due to mining methods that resulted in heaps of mantle material ending up on mine dumps, UCT boasts the finest collection of mantle rocks in the world. This collection, which now contains over 30 tonnes of material, is all the more precious because newer mining methods, which grind the kimberlite finely, mean that no new such sources are available.

For the first time, the collection will be on display, as part of the 'Messengers from the Mantle' exhibition – one part of the International Geological Congress, which will be held at the Cape Town International Convention Centre from 29 August to 2 September 2016.

Dr Steven Richardson has been awarded the Draper Memorial Medal of the Geological Society of South Africa (GSSA) for 2014. The Draper Memorial Medal is awarded annually to recognise “an exceptional member of the geological profession who, in the spirit of GSSA founding father Dr David Draper, has excelled in the advancement of South African Earth Science". The medal was formally presented to Dr Richardson at a function on Thursday 25th of August 2016.