Two in three Africans are younger than 35. Youth - people between the ages of 15 and 35 - make up more than 35% of Africa's total population. They have been identified as central to efforts to drive the vast continent's economic development.

The African Youth Charter identifies young people as “partners, assets and a prerequisite for sustainable development and for the peace and prosperity of Africa”. It also outlines their rights and responsibilities, including active citizenship.

Accordingly, the African Union (AU) has themed 2017 the “year of investment in youth to harness the African demographic dividend”. Regional and national youth empowerment policies have also been introduced.

Yet a new survey by Afrobarometer, a non-partisan research network, shows a wide gap between these aspirations and the reality of youth political engagement.

The levels of political engagement and participation in public life are on the decline among young Africans. This trend is worrying. Engagement in the political process is an important avenue for citizen empowerment in democracies worldwide.

Having a voice in economic policies is particularly important for African youth because of the “unemployment crisis” affecting this age group. At 30.5%, North Africa has the highest youth unemployment rate in the world, while 11.6% of young people in sub-Saharan Africa are unemployed.

Interest in public affairs has declined substantially, from 81% in 2002/2003 to 58% in 2014/2015, in the 16 African countries tracked during this period. Participation rates also decreased on measures of civic engagement, which provide important avenues for representation between electoral cycles. 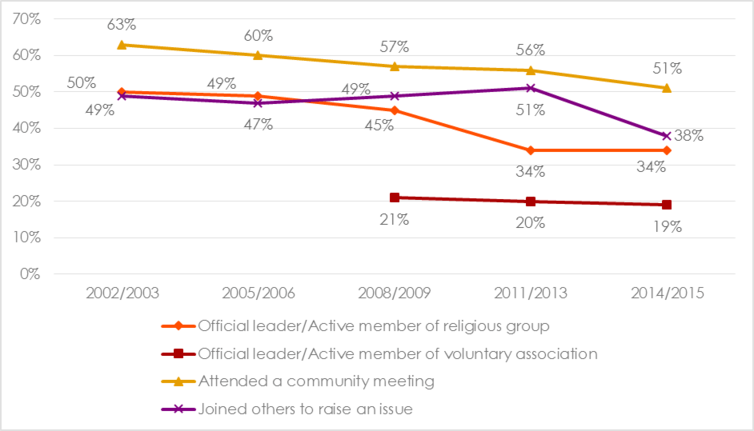 Respondents were asked: 1. Now I am going to read out a list of groups that people join or attend. For each one, could you tell me whether you are an official leader, an active member, an inactive member, or not a member? 2. Here is a list of actions that people sometimes take as citizens. For each of these, please tell me whether you, personally, have done any of these things during the past year. (% “yes”)

The report, which was released on International Youth Day, is based on almost 54,000 interviews in 36 countries in 2014 and 2015. Included in the surveys were Algeria, Kenya, Nigeria, South Africa and Zimbabwe.

Only slightly more than half (53%) of African youth polled say they are “somewhat” interested in public affairs. Two-thirds (67%) say they discuss these issues “occasionally” or “frequently” with family and friends.

But young citizens report lower rates of political engagement than their elders across a variety of indicators, including voting. These findings are consistent with research on age differences in political participation in advanced democracies.

As shown in the following infographic, two-thirds (65%) of 18- to 35-year-old respondents who were old enough to vote in their respective countries' last national election say they did so. That's compared to 79% of citizens older than 35. 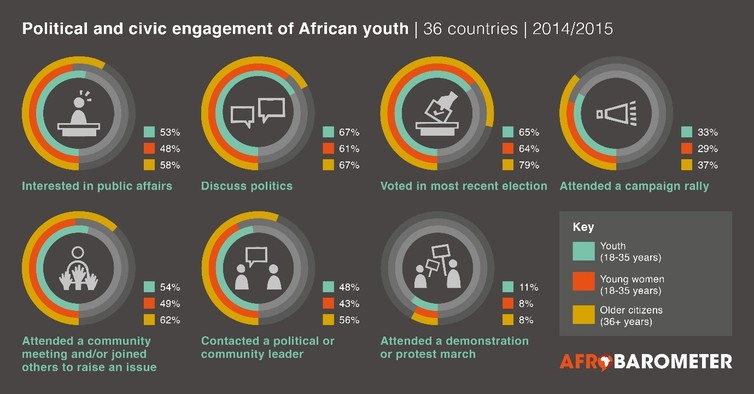 Less than 10% of young people polled said they participated in pre-electoral activities like campaign rallies. The same goes for civic activities such as attending community meetings, joining others to raise an issue, and contacting political or community leaders. A slightly higher number (11%) of those surveyed said they had participated in a demonstration or protest in the preceding year.

Africa is experiencing unprecedented population growth in terms of both scale and speed. The continent's population is expected to double to 2.4 billion by 2050. This is partly because of significant declines in child mortality rates. About 10 million young people enter the labour market each year.

East Asian countries were able to capitalise on a large youth cohort – the so-called “demographic dividend” – to fuel an “economic miracle” during the 1990s.

The AU aims to replicate this success by 2063 via supportive policies, including the promotion of youth development and empowerment. In May 2016 the organisation held a series of events to commemorate the 10th anniversary of the African Youth Charter and to draft activities for its 2017 theme.

The youth charter requires its signatories to eliminate laws and practices that are discriminatory toward girls and women. The objective here is to ensure equal access to all spheres of society. But, young women consistently report lower levels of political engagement than their male peers. This is particularly so in West African and East African countries.

This finding indicates that there are persisting social barriers to their participation in the political sphere. On average, disparities between young men and women's engagement levels are largest for measures of “cognitive engagement” (interest and discussion levels) and smallest for voting (Table 1).

Six in 10 male youth say they are “somewhat” or “very” interested in public affairs, compared to less than half (48%) of young women. Similarly, young men are significantly more likely to discuss politics at least “occasionally” than young women (74% vs. 61%). In contrast, the difference between male and female voting rates (66% vs. 64%) is not statistically significant. These results suggest that many citizens, including many young women, continue to see politics as primarily a space for men.

Given these trends, greater civic education for all youth – and particularly for young women – may be one strategy for moving toward the AU aspiration of an empowered young citizenry that acts as an agent for prosperity, peace, and development on the continent.

Women's empowerment is particularly crucial to economic development because Africa's youth bulge will lead to accelerated economic growth only in countries in which fertility rates are low enough to reduce the proportion of young dependent citizens (children).

Better-educated, healthier and empowered women are more likely to have fewer children and to enter the labour market. Greater female political representation is also likely to lead to more supportive policies for gender equality.

Although there are some notable female political leaders, among them Liberian President Ellen Johnson Sirleaf and AU Commission chairperson Nkosazana Dlamini-Zuma, women only make up a minority of parliamentary representatives in sub-Saharan Africa (23%) and in Arab states (18%).