Two UCT opera singers, Bongiwe Nakani and Noluvuyiso Mpofu – both alumni of the South African College of Music – are through to the semi-finals of the 35th International Hans Gabor Belvedere Singing Competition after a sterling performance in yesterday's quarter-finals.

They will compete today and tomorrow at the Baxter Theatre for a spot in the finals, which will take place on Saturday, 2 July 2016, at the Artscape Theatre.

Noluvuyiso Mpofu is currently a member of the Cape Town Opera Studio, and recently graduated with her postgraduate diploma in opera.

“I first heard opera at school eisteddfods and I just fell in love with the music itself. I decided to try competing the following year – I didn't do too well. But I went back the following year and I was provincial champ in Port Elizabeth and position two nationally. That's when I decided that music was my calling,” says Mpofu.

She enjoys the different emotions that are in the music. “The composers back then just had a way with writing music, putting the words together and forming a story that is compelling,” she says. 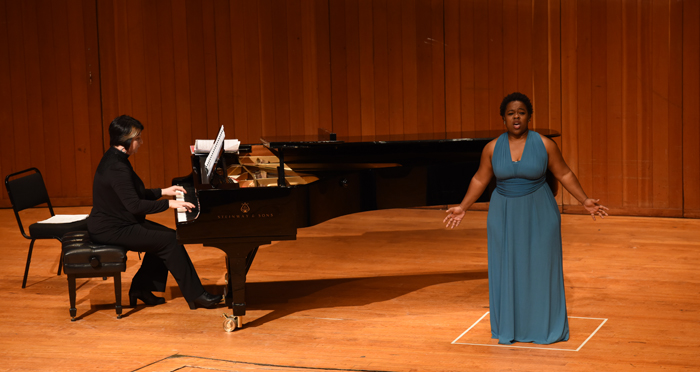 Bongiwe Nakani, a mezzo-soprano, during her audition in the quarter-finals of the Belvedere Singing Competition.

Bongiwe Nakani has a performer's diploma in opera from the South African College of Music. She was introduced to choral music by her older sister, and later discovered opera in high school while participating in school eisteddfods.

“I love the story behind the songs,” says Nakani. “The story is always something that happened to someone and you get a chance to be that person even if you have never met them … for some reason, when you sing their song, you feel connected to them.”

Nakani will be travelling to Mexico next month with other UCT alumni to perform in the Placido Domingo Operalia, and she will also join the ensemble of the Vienna State Opera in Austria in September.

The Belvedere Singing Competition has been a launch pad for UCT alumni such as Pretty Yende who won the competition in 2009 and Levy Sekgapane who won in 2015. Siyabulela Ntlale, who was placed second in 2014, and Hlengiwe Mkhwanazi, who took the second prize in 2013, are also UCT Opera School alumni.

Professor Kamal Khan, director of the UCT Opera School, said: “We have untrammelled access to some very, very gifted singers. I think we're also so successful because we give our students so much performance experience. It's good preparation for when you get into the real world. I am hugely proud of our students and graduates and what they've achieved.”

The final rounds of the Belvedere competition have been held in Vienna, Austria, since its inception. Known as the world cup of opera, this is the first year that the competition takes place outside of Europe.