UCT's Professor Xolela Mangcu walks into his office carrying two books, one of which is Steve Biko's I Write What I Like. “That's my Bible,” he says.

Biko and Mangcu both received funding for their work from the Oppenheimer dynasty – Biko through Anglo American and Mangcu through the Harry Oppenheimer Fellowship Award, which comes with a R1.5 million research grant. Mangcu was jointly awarded the Oppenheimer Fellowship Award with Professor Brenda Whitfield, a geneticist from the University of Pretoria, on 3 June 2016. Mangcu will use the grant to complete Nelson Mandela: Romantic Hero, Tragic Figure, a biography on the late freedom fighter and politician.

Yusuf Omar spoke to Mangcu about the award and the book.

YO: Congratulations. It's a huge award.

Most of the finalists were people from the natural and the biological sciences. That has been the bulk of the people that have received the award over the last 14 years. So I was apprehensive about whether, as a humanities scholar, I would compete favourably against the scientists.

“[Winning the award] was like an out-of-body experience. I still pinch myself.”

It was like an out-of-body experience. I still pinch myself. To get to this point it's almost like the highest point in my academic career.

I hope it's an inspiration to younger scholars, particularly those in the student movements that have erupted over the past few years, because I did not have to give up my voice, give up my political ideas, in order to compete with academics.

You can be an activist and an academic at the same time. It's very important for students to understand that.

YO: This has been a big year for you.

XM: Yes, it has been. I've been promoted to full professor, turned 50 and have just been awarded the most prestigious research prize in Africa.

I'm quite chuffed. But it comes after four very hard years of struggle, of sometimes lonely arguments for transformation – which of course is something I will continue doing, to continue to impress on the university to possibly use the work that I and many others do to try and transform the curriculum.

The award, then, is about black scholarship. In the 1970s, the Ernest Oppenheimer Trust funded one Wellington Tshazibana to do a PhD at Oxford University. Tshazibana was subsequently killed in detention under apartheid for the bombing of the Carlton Centre in Johannesburg.

So there are different kinds of people who have benefitted from funding from the Oppenheimers and Anglo American. Even Steve Biko received funding for the Zanempilo Clinic in the Eastern Cape from Anglo. So I did not feel that I would need to hide who I am or what my work is about.

The prize will fund my writing of a biography about the late Nelson Mandela.

The biography is about Mandela in the context of black intellectual history, and that is what our students need to know more about. That history has really been hidden from the curriculum. 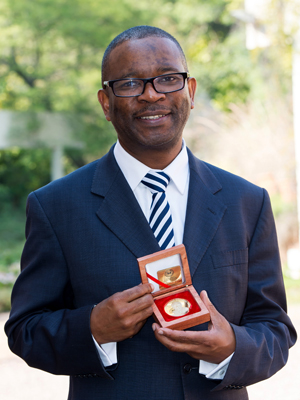 “This work is using Mandela to put a spotlight on black intellectual history.”

I always say to the students in the student movements that I wish they could stop this obsession with Frantz Fanon and do research on black intellectual history in this country, going back to the 19th century. There are more than a hundred intellectuals whose biographies could be written. I'm hoping that this process will help me highlight that history because I'm locating Mandela within it.

In a sense, this work is using Mandela to put a spotlight on black intellectual history.

YO: It's not something that has been done earnestly until now.

I'm trying to place him among other protagonists to get a fuller history of not only him but of the black political society.

YO: Who are some of these protagonists?

All of the biographies of Mandela tend to focus on this one chief who raised him, as the main inspiration. I'm arguing that the political forces were much more diverse, much more complex and much more sophisticated than that one-dimensional narrative.

But that's a function of a white, anthropological view of black society: that he came from the rural areas, therefore he must have learned from the rural chiefs what it means to be a leader. Their view excludes the modern political ideas in that area, especially Thembuland, which was the epicentre of black politics in the 19th century.

YO: So it's unlikely that he would not have been exposed to any other political ideas.

He would have been exposed to their ideas despite not being a member. But what's interesting in the case of the Unity Movement is that the intellectuals of the Unity Movement who dominated Transkei politics where he grew up, have not only not been recognised, but they would most likely have seen Mandela as an upstart.

When he emerges as a leader, he emerges only when he is in Johannesburg. Had he gone back to the Transkei – if he were to have been political – he would have found himself playing second fiddle to people like Wycliffe Tsotsi, but he went to Johannesburg and became part of an emerging ANC at the time.

But the ANC, it should be remembered, had been defunct nationally at the time. So it's important to understand that Mandela does not represent the entirety of the liberation struggle and the liberation movements, and that his emergence was a strategy of the ANC to reorganise itself and to reassert itself politically. And it worked.

That has to do with his own capabilities as a leader – somebody who was able to articulate their position and their views. But the fact that they won and became dominant does not mean they were the only people who shaped our history.

If you look at the history of black society from Tiyo Soga in the 1870s, and the emergence of a very large intellectual class in the late 19th century, you will see that there was a plurality of ideas, a plurality of voices, a plurality of organisations. Some were more Pan Africanist, and then of course there was the development of Black Consciousness.

I was a critic of Mandela, personally, and he knew that, and that drew me to him. He must have been surprised and fascinated by this young man who did not agree with his politics on race in particular. But in a sense we were drawn to each other by the fact that I did not agree with him.

I hope that other politicians would learn that from him: that the people who disagree with him are not necessarily our enemies.

He's a human being. Not only that: he was a politician. There's no politician with whom everybody agrees. So why should it be different with him? As with any politician, there are people with different points of view, and it's those points of view I want to highlight in this book.

YO: Tell us about the book's title.

“In Greek tragedy, it's not what happens to the hero, but rather what happens through the hero to the entire community. Even when the hero has died and has left the stage, the chorus continues, and Mandela should be understood also in this way.”

As Raymond Williams put it, in Greek tragedy, “it's not what happens to the hero, but rather what happens through the hero” – to the entire community – that matters. Even when the hero has died and has left the stage, the chorus continues, and Mandela should be understood also in this way.

The tragic hero is a much better metaphor for understanding Mandela or any other hero of our struggle.

YO: To what do we owe the idea of Mandela as a romantic hero?

XM: The idea of the romantic hero is a function, number one, of the intellectual culture of the West, particularly from the medieval times through the Renaissance, and obviously now. It was the growth of individualism in Western thought that led to the idea of the hero being separated from the communal experience that was at the heart of the tragic hero in Greek tragedy.

Secondly, his biographers come from this intellectual heritage. It's also the white hegemonic writing about Mandela which was focused on this kind of anthropological description of him as a product of the traditional village, to the exclusion of black political modernity.

And then of course it's a function of what the ANC actually did, which was to make Mandela the symbol of the struggle. So there are all these layers of Mandela as a romantic hero, and I'm trying to pull those layers back and get to the idea of the tragic hero. If we are to understand the relationship between heroes and their societies, the tragic is much more instructive.

Societies continue beyond the hero.

YO: This is, in some ways, turning some of the founding myths of the new South Africa on its head.

I've never been known to write to confirm existing orthodoxies.

An example: the idea of ‘black' meaning black, coloured and Indian is an idea that came from the Black Consciousness Movement. But it's an idea that's in our Constitution now. We must be tolerant of different ideas, because they can shape who we are.

And you don't do that by just focusing on Mandela as the be-all and end-all of our society. You just diminish the history of ideas if you do, whereas you can use him as a way to open up that history of ideas. A biography shouldn't be hagiography.

Mandela himself insisted that he was not a saint. But he did that from a personal perspective. What I'm saying is from a political perspective; he was a contested individual.

One of my first interactions with Mandela was about an article he wrote called “Wither, Black Consciousness”, which he wrote in prison and was published in a 2002 book by Mac Maharaj. I wrote a strong response, criticising his criticism of Black Consciousness.

He invited me to his house and said his ideas had since evolved, that he wrote that article in 1975, but that after many years he had begun to appreciate the power of Black Consciousness in giving pride and dignity back to black people.

“I've always been very critical of Mandela's avoidance of race. The re-emergence of racism in this country is evidence that this approach does not work. It is no longer justifiable.”

Not that Mandela was perfect; one of the characteristics of the Greek tragic hero is that they are flawed. But where Mandela had Mbeki, Tambo and Sisulu to hold him in check, the current leaders have nobody to counteract them in their organisation, and that's what makes them so dangerous.

I've always been very critical of Mandela's avoidance of race. The re-emergence of racism in this country is evidence that this approach does not work. It is no longer justifiable.

Despite my criticism of Mandela, I reject the idea of him being a sell-out. Nobody spends 27 years of their life in prison and deserves to be called a sell-out. It's ridiculous.