A team of astronomers from UCT and the Southern African Large Telescope (SALT) has identified a rare star that exploded around 1 500 years ago. At the time, the star would have outshone all the stars of the Orion constellation, reaching a similar brightness to Jupiter in the night sky.

Dr Brent Miszalski, SALT astronomer at the South African Astronomical Observatory (SAAO), said: "Putting together the pieces of this cosmic puzzle has been a detective story bringing together the very latest astronomical equipment and millennia-old Chinese records of the variable night sky."

The find was reported in a recently published paper by a team of astronomers based in South Africa, England, Chile, Spain and Mexico.

Amateur astronomers found the peculiar-looking nebula, called Te 11, in the Orion constellation in 2010. Astronomers weren't sure what to make of it, but they have now resolved the conundrum. First observations of this star at the centre of the nebula (a cloud of gas and dust in outer space) showed it to be a double star system in a close orbit of almost three hours.

The team responsible for this discovery, a group of astronomers with expertise in the envelopes of old stars led by Dr Brent Miszalski at the SALT/SAAO, were soon joined by UCT astronomers Professor Patrick Woudt, head of astronomy at UCT, Professor Brian Warner and PhD student Ms Mokhine Motsoaledi, who had also directed their attention to this unusual star.

By noticing variations in the brightness of this star over several years, Professor Woudt and colleagues amassed high-speed observations recording the changes in the binary's light. The jumps in the light curve imply that the star is a dwarf nova (a star hiccuping material nibbled off the companion).

“Such a combination of a dwarf nova with a nebula is extremely rare,” said Professor Woudt.

Key to working out the nature of the Te 11 nebula was calculating its distance. Here the huge light collecting power of the 11-metre Southern African Large Telescope in Sutherland was used to peer into the heart of the nebula, pinning down the temperature of one of the stars present. This was worked into the modelling of the light curve to yield a distance of around 1 000 light years – putting Te 11 on the edge of the Orion­–Eridanus superbubble. This distance confirmed that the nebula could not be the ejected envelope of an old star like the Sun.

Looking back in time at Chinese historical records, Professor Warner found that there was a bright guest star in Orion during 483 CE near the position of Te 11.

“This remarkable connection suggests that Te 11 is the leftovers of this explosion of more than 1 500 years ago,” said Professor Warner. “Pairings in astronomy as found in Te 11 are exceedingly rare, but it is anticipated that planned studies of the night sky will find a whole lot more.” 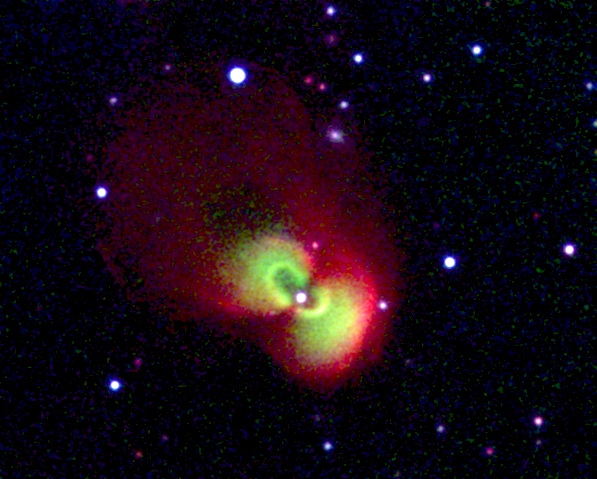 South African astronomers are looking forward to using the upcoming MeerLICHT facility in Sutherland that may help find similar objects to Te 11.

MeerLICHT will be a dedicated wide-field optical telescope that will robotically follow the gaze of the MeerKAT radio telescope array, a precursor array that will form part of the Square Kilometre Array, which will start early science this year.

Professor Woudt said: “Planned surveys with MeerKAT and MeerLICHT will scan the southern skies for more of these unusual objects, which can tell us more about the formation and the evolution of these compact binaries in the Milky Way”.

With a binary period of only 2.9 hours, the two stars in Te11 are separated by about twice the Earth–Moon distance.

There is a long history of scientific collaboration between UCT and the SAAO, which operates SALT on behalf of an international group of partners. UCT and SAAO have a number of joint staff positions, and both are partners in the MeerLICHT project.

MeerLICHT is a robotic telescope that will soon be installed in Sutherland and which will be permanently tied to the observing schedule of MeerKAT. As demonstrated in the case of Te 11, the Southern African Large Telescope proved fundamental in understanding the faint traces from transient signal.

“The unique combination of SALT, MeerKAT and MeerLICHT bodes very well for peering deeper into the transient southern skies in the coming years,” says Professor Woudt.

Read more about the research