It's been an exceptionally busy year for legal counsellor Anne Isaac, who works in the registrar's office in Bremner, where she has had to burn the midnight oil with outgoing registrar Hugh Amoore on many an occasion. But that did not stop her wanting to pay her own special tribute to him for a very particular reason.

Legal counsellor in the registrar's office Anne Isaac said she didn't want to “crash” any of outgoing registrar Hugh Amoore's other farewells but felt that there needed to be something that reflected another side to his character, particularly because she felt she owed so much to him, both personally and professionally.

So, to show her deep gratitude, Isaac organised a special farewell at Bremner featuring an Indian customary ceremony.

“When an Indian person puts their hands together and touches a person's feet, that is the highest form of respect,” she explains of the evening.

Burning a hole in the carpet

Isaac recalls arriving at UCT in 2010 from the courts where she had worked as a prosecutor dealing with horrific crimes such as hijacking, rape and murder, hoping for a quiet environment where she could “heal” her soul.

It was an adjustment and she found that her outgoing, outspoken personality sometimes was at odds with the university's more staid atmosphere. Nevertheless, the two, who share a birthday, developed a deep rapport – not least because of Amoore's vast legal knowledge (although he did not train as a lawyer) and they had many lively professional discussions.

“I would burn a hole in his carpet sometimes arguing with him,” she says. “You knew when something was not negotiable with him, but I also knew when I could push the boundaries.” 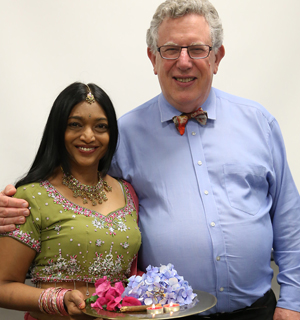 Saying goodbye: Legal counsellor Anne Isaac, who organised the farewell for outgoing registrar Hugh Amoore, says she owes him a great deal both personally and professionally.

But she wanted people to see the side of the Hugh Amoore who always had time to chat to her young daughter Zander (now 13), and would even demonstrate in the passages of Bremner how a plié should be done.

“To a child of seven he was a giant of a man with a shock of curly hair and a red bowtie,” Zander explains. On first meeting him, she went home and said: “I think I just met Santa.”

This is the man who could quote Milton at length, or who would lighten the mood by reading out loud the classic Herman Charles Bosman story, A Bekkersdal Marathon.

But for her, “the most emotional thing is that he saved my life”, says Isaac.

This was the day in 2012 when Amoore noticed her limping into a meeting with her bag in disarray. He recognised that something was wrong.

“When he told me to see a doctor, he did so in no uncertain terms.”

To satisfy the registrar's request she secured an appointment with a GP who was able to help. She does not believe that she would currently be in such perfect health, had she not heeded Amoore's advice. Friends and family now liken her energy levels to a hurricane!

The GP helped to stabilise her condition, and in 18 months, her recovery was complete.

She says: “Hugh Amoore is known for his great institutional knowledge, but not everyone can say he is responsible for your size 8 dress. I just love him for that!”

Story by Andrea Weiss. Photos by Je'nine May