The arts have a vital role in the construction of a just society, by creating the space for new ways of thinking, speaking and therefore understanding the world. Professor Carrol Clarkson explains how.

Aesthetics has to do with knowledge acquired through the senses, and careful attention to what is available within a field of sensory perception gives us an indication of how a society perceives itself. So: what can be seen and heard? Who has a voice? What makes headline news? What is censored?

Answers to questions like these help us to better understand how a society delineates itself. Changing the field of perception may be one way of encouraging a different appreciation of what counts and of what matters – and hence, of opening up the possibility of imagining a more just society.

Speaking at her inaugural lecture on 21 May, titled Drawing the Line, literature and theory expert Professor Carrol Clarkson argued that aesthetic discourses are just as important as legal and 'rational' discourses – especially when it comes to matters of social justice. She also subtly demonstrated her argument that the way we speak and think about ourselves has profound implications for how we behave, and for the decisions we make.

Weaving together strands from ancient Greek philosophy and contemporary political theory, as well as referencing post-apartheid South Africa's struggle with identity, Clarkson literally drew the line. Using the chalkboard behind the lectern, she created a 'timeline' of her defence of critical theory's role in addressing questions of transitional justice – sketching visual hooks of both theories and people, which guided the audience through the motivation for her argument.

Of art and morality

"Art, like morality, consists of drawing the line somewhere," began Clarkson, quoting writer and philosopher GK Chesterton. "The act of drawing this line is an art as much as it is a question of morality."

The drawn line reconfigures space; "it divides, yet juxtaposes two entities; it connects two distant points; it includes some and excludes others; it marks a boundary between standing for, and standing against."

"What I want to suggest is that legal and political discourses on their own may not be enough to make sense of these lines," said Clarkson. "That is to say, I'll be making a case for the value of an aesthetic discourse – not least when it comes to thinking through questions of social justice."

Art's place in the 'ideal state'

In Plato's imaginings of an 'ideal' state, the Republic, the artists and the poets were not welcome, Clarkson explained. "It has yet to be proved that the arts have a place in a well-run society", was one justification. Law and rational principles were deemed the only lenses through which to see the world.

But it is the arts that provide a lens through which to interpret society and its habitus and thus provide a way to question norms and break a path to new and seemingly strange ideas, argued Clarkson. It is in the recognition of the "new in the utterance of 'the other' that the process of transitional justice can begin ... [And] if this is so, then the constitution of a new legal order has primarily to do with speaking a newly readable language" – a new form of expression.

Perception and the aesthetic act

Clarkson takes an "aesthetic act" (to borrow Jacques Ranciére's phrase) to be "any event, or an encounter with a work, a text, a painting, that brings about a different perception of one's standing in relation to others." Ideologies, values and ideals are bound up in what can be seen and heard, said Clarkson, and this field of sensory perception influences how we think.

"In her seminal paper on ubuntu, former Constitutional Judge Yvonne Mokgoro foregrounds the integral role of perception in political thought: ubuntu is a 'world view', 'a determining factor in the formation of perceptions which influence social conduct', Mokgoro tells us.

"What interests me is the context in which certain works, acts, or encounters, by creating a new field of perception, have the potential to bring about shifts in the way a community delineates itself in terms of what it perceives to be significant, or even noticeable at all."

Clarkson used Nelson Mandela's statement from the dock at the Rivonia Trial in 1964 as her primary example.

By representing himself and using the trial as a "showcase for the ANC's moral opposition to racism", the late freedom fighter was using an apartheid court of law as a channel for a political protest, said Clarkson. "As a result, the relation between law and politics in South Africa became irrevocably troubled: a political appeal to humanity's conscience suddenly had a spectacular and legitimate place within the overall social configuration of apartheid South Africa.

"Mandela's words radically altered the social system determining what could legitimately be seen and heard, and hence brought out starkly the oppressive delimitations that had prevented people from perceiving what they actually shared in common."

An aesthetic understanding brings us back to our senses, said Clarkson; it allows us to think, question and recalibrate our perceptions of what is "salient, legitimate and meaningful" by drawing attention to the political implications of different modes of representation.

"It's at the level of the materialisation of values and ideals – in writing, speech, and other forms of cultural production – that we are able to recalibrate the settings which have traction on the way we think.

"A shift in our modes of representation within given contexts has the potential to affect social perceptions of what can be seen and heard, of what counts and of what matters."

These perceptions delineate the ambit of personal, political and cultural commitments, and our margins of exposure of one to another, said Clarkson.

"This is why I think aesthetic considerations are valuable in the thinking through of questions of social justice.

"So it's not just a question of what do I profess, but how do I profess? This also inaugurates lines of force between you and me; what I like to think of as an ethics of address."

Clarkson's combination of detailed referencing and more light-hearted representations of the same arguments on the chalkboard left her audience with a succinct demonstration of one way to reimagine the 'how'. 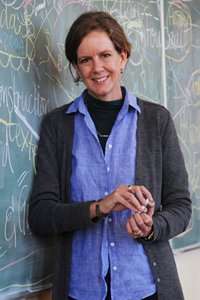