A brief tour of the humanities of bygone times, told through UCT buildings.

The Arts Block is one of the original UCT structures, designed by architect JM Solomon, who sadly committed suicide before he was able to see his work completed. Arts 100 is one of the few lecture theatres on campus featuring its original design.

The Beattie Building houses the humanities faculty's offices, and was named (in 1964) after Sir John Caruthers (Jock) Beattie, the principal and first vice-chancellor of UCT (1918-1937). He's also the only person to be buried on upper campus, with his grave situated just above UCT's tennis clubhouse.

The Isaac and Jessie Kaplan Centre for Jewish Studies and Research is based at Rachel Bloch House. Established in 1980, under the terms of a gift to the University of Cape Town by the Kaplan Kushlick Foundation and named after the parents of Mendel and Robert Kaplan, the Kaplan Centre seeks to stimulate and promote the field of Jewish studies and research. It also houses the Jewish Studies library, a collection that includes twentieth-century Yiddish literature as well as texts looted by the Nazis during World War II and rescued by the Jewish Cultural Reconstruction Committee. 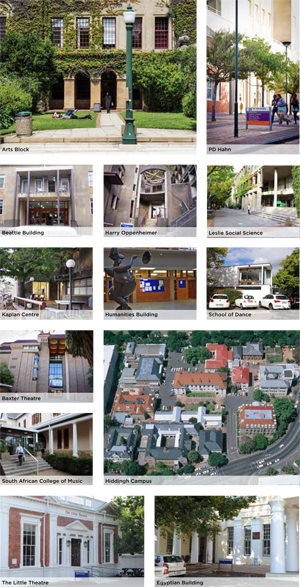 The Harry Oppenheimer Institute houses the Centre for Africa Studies as well as the African Gender Institute and is named after the diamond magnate, previous chancellor of the university (presiding from 1967 to 1999), and one of the world's richest men.

The Leslie complex (Leslie Social Science and Leslie Commerce), originally a series of huts, was named after the first professor of economics at UCT, Robert Leslie, and was completed in 1979.

UCT's Department of Psychology (based in the humanities) is located with the sciences in PD Hahn, named after the Jamieson Professor of Experimental Physics and Practical Chemistry, Paul Daniel Hahn (at whose request women were admitted to study chemistry). A great deal of the art you'll see in the building is by Associate Professor Fritha Langerman, director of the Michaelis School of Fine Art. Department of Philosophy and the School of Education.

The Baxter Theatre came under UCT's jurisdiction so that state control didn't hamper the theatre's ability to stage multiracial productions. The theatre turns 37 this year.

The South African College of Music was founded in 1910 by Mine Niay-Darroll and a group of musicians, and opened in Strand Street. It had six students. In 1925 the school moved to its current location, Strubenholm – the private residence of Henry Struben. The college boasts several string, wind, jazz and percussion ensembles, as well as choirs, a symphony orchestra, a jazz big band and an opera school. The WH Bell Music Library, just next to the college, was the first completely self-contained, functionally designed music library in Africa, and opened in August 1943. It now comprises 10 000+ books, 33 000+ pieces of music, 5 000+ gramophone records and 2 500 CDs.

Initially established in 1934 as the UCT Ballet School, the School of Dance has been the training ground of many generations of South African ballet dancers, some of whom went on to achieve significant success, both in local ballet companies and abroad. Over the decades the school has broadened its base to incorporate other dance forms. Since 1998, both African dance and contemporary dance have been offered as full streams. 2014 marks its 80th anniversary.

Many of the buildings on Hiddingh Campus were designed in the office of Herbert Baker (the original plans can be found in the Baker Collection, in Manuscripts & Archives) and named after a kindly benefactor: WM Hiddingh, who bequeathed Â£15 514 to the South African College. English composer and conductor Professor William Henry Bell, the first Professor of Music (1923-1935), single-handedly created the Little Theatre out of an old chemistry laboratory in 1931.

The Orange Street location of the Egyptian Building on Hiddingh Campus was a zoo in the late 18th century, complete with lion's dens and a small lake that supposedly housed a hippo. The structure itself was UCT's first (it predates the Groote Schuur campus) and was the first built for the express purpose of higher education in South Africa. Built in the Egyptian revival style, which includes motifs and imagery of Ancient Egypt, it was completed and opened in 1841. It is now part of the Michaelis School of Fine Art.