Social impact bonds can help government drive vital job creation in South Africa, says a policy paper delivered to the National Treasury and the Department of Trade and Industry in early April. Spearheaded by the Graduate School of Business's (GSB) Aunnie Patton, the policy report is the outcome of a six-month study, funded by the Treasury.

Social impact bonds first made headlines in the UK in 2010 after they were pioneered by NPO Social Finance in a pilot project to reduce recidivism among 3 000 short-term prisoners in Peterborough Prison, Cambridgeshire.

Three years later, interim figures from Britain's Ministry of Justice showed a 6% decrease in recidivism among this group between 2010 and 2012, compared to a 16% national increase for the same period. The results were encouraging, and the world took notice.

Like microlending, social impact bonds have followed in the wake of a recent worldwide wave of innovative financing ideas designed to tackle social problems in innovative ways.

Social impact bonds do not operate on a debt and repayment system. Instead, they're social investment vehicles, outcomes-based contracts between government, private investors and philanthropic organisations. Investors provide capital to underwrite the social projects usually funded by tax money and philanthropists.

If a project is successful when measured against pre-agreed benchmarks, the investor gets a return on the economic value created for government. If the project doesn't work, investors lose their money. Only successful projects are rewarded.

Set against a global backdrop of shrinking funding, the concept took off. By 2013, there were reportedly over 40 social impact bonds in operation or in development. Early adopters were the US, Canada, and Australia.

Developing countries like South Africa have been slower off the mark.

But that's set to change, says Aunnie Patton, who heads the Bertha Centre's Innovative Financing Initiative at the GSB, part of the Bertha Centre for Social Innovation and Entrepreneurship.

Patton is hopeful that the recent policy paper will pave the way for the country's first social impact bond, designed to catalyse job creation by providing business development services to small and medium enterprises. The policy paper was developed in conjunction with Genesis Analytics and Social Finance, and underwritten by the National Treasury and the Flanders International Co-operation Agency.

The envisaged intervention rests on a partnership between the Treasury, corporations, foundations and other possible 'outcome funders', via an innovation fund that would commission simplified, tariff-based social impact bonds for business development services.

As Ryan Short - a partner at Genesis Analytics - points out, there's no shortage of business development services. But there is limited evidence of what works. Social impact bonds are geared to finding what works, quickly, and replicating these efforts.

"Social impact bonds could play a significant role in addressing the limited understanding of what works and what doesn't, driving future funding to the most effective providers," says Patton.

"It's a tide that's starting to turn, and it makes a lot of business sense," she adds.

For high-worth investors looking to leave a legacy, it's a win-win situation.

"For example, they can invest in a youth unemployment programme and have a return on their capital investment.

"We're working to help the government get their head around the concept. The Bertha Centre sits at the middle of this, trying to catalyse these intermediaries to help them develop and initiate the bonds.

"We have traction at national, provincial and local levels, and we have a whole lot of philanthropists and foundations looking to make their giving sustainable. We also have very separate worlds starting to talk to each other: government, financiers, and philanthropists."

Job creation is just the start. Other critical needs are early childhood development, education, and healthcare. 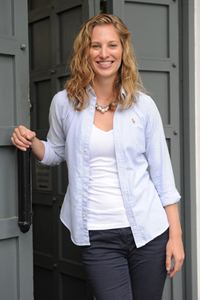 Patton is a Social Finance Fellow at the GSB, Dean's Fellow at the University of Oxford's SaÃ¯d Business School, and co-founder of Insight Capital Partners. Her background is in mergers and acquisitions in investment banking in her native US. After reading Nobel Peace Prize winner Dr Muhammad Yunus' Creating a World Without Poverty, she did some soul-searching and volunteered in India. She became enamoured with the idea of using finance as a creative tool to address "wicked" problems, particularly social problems, and helped to start Unitus Capital, an investment bank in Bangalore. While tackling an MBA at Oxford, Patton began researching novel financial instruments, while also teaching finance to fellow students. This resulted in an invitation to teach in the finance department at Oxford. A chance meeting with UCT's Dr Francois Bonnici, director of the Bertha Centre for Social Innovation and Entrepreneurship, brought her to Cape Town. After a particularly bad UK winter it seemed a good idea to stay. "I'd wanted to do some work on the ground again, and South Africa was the perfect place." Patton does a "crazy commute" between Oxford, where she still teaches, and the Mother City.