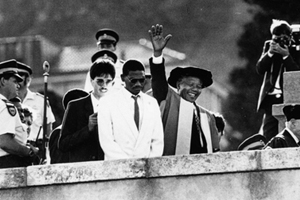 Nelson Mandela visited the University of Cape Town at pivotal times - both in the country's history and in the life of the university - bringing with him messages of peace, reconciliation and the need for transformation.

In November 1990, shortly after he was released from prison, South Africa's iconic leader stepped onto the UCT rugby field to the roar of the crowd, to receive an honorary doctorate in law. The university's Jameson Hall, where the ceremonies are normally held, simply could not contain the number of people who wanted to be part of the historic event.

Madiba, who had stood for justice his whole life, said he was deeply honoured to receive the degree of Doctor of Laws. "Through this action you have chosen to identify with those committed to the cause of peace and justice in this country," he told students, faculty, staff and members of the public on 30 November, 1990.

Mandela also commended the university and its students for their activism and said the ties between the student body and those who had stood in the vanguard of the struggle for freedom stretched back over a number of decades.

"During the 1950s when the ruling Nationalist Party embarked on one of the most sinister aspects of apartheid policy, the destruction of academic freedom and the imposition of university apartheid, it was your student body that led the entire university community in mounting consistent and determined resistance. In the following decade, it was once again the students of UCT who galvanised their institution into opposing the first State of Emergency and the passage of the 90-day detention laws."

He also spoke of how UCT students had supported him and his fellow prisoners during many dark days on Robben Island. "Those of us who spent the latter part of that decade in the gloomy cells of Robben Island will forever hold dear the memory of the young men and women of the University of Cape Town who raised funds to provide us with books for study, collected their own textbooks and donated these for our use. In various other ways they kept our hope alive by clear demonstrations that the prison walls had not deleted our names from the collective memory."

Madiba's visit to UCT in 1990 came at a momentous and difficult time for the country. While many people were celebrating the unbanning of the ANC, Pan Africanist Congress and the South African Communist Party, the spate of political killings in Kwazulu-Natal and other parts of the country was extremely worrying.

Mandela used the opportunity in his address to call for an end to violence.

"We want to appeal to all South Africans to join us in calling for an end to violence. We invite all our compatriots - of whatever political persuasion and irrespective of race - to join us in building a national consensus around the need for peace."

He also focused on transformation at UCT.

"The university's admission and exclusive policies also require recasting to increase access to this institution for those who are deprived. We should arrive at a point where both the faculty and student body are reflective of the demographic make-up of our country." By the time he visited the university again in 1996, Nelson Mandela was President of the country and UCT was about to install its first ever black woman Vice-Chancellor, Dr Mamphela Ramphele.

Staff and students welcomed him with open arms when he arrived at UCT to speak at Ramphele's installation as Vice-Chancellor on 11 October 1996.

Referring to the incoming VC as 'a daughter and friend to me' he said she was a 'powerful role model' and that he was proud to be speaking at such an important ceremony.

"The installation of a university vice-chancellor is always an occasion of great moment. At an institution like the University of Cape Town - our oldest university and a world-renowned centre of learning and science - it evokes both the enduring character of the university and the constant renewal of scholarship and scientific inquiry."

Madiba also used the public platform to speak out about the transformation of universities. He challenged UCT to look at its research tasks, given the different needs and priorities in a new democratic South Africa.

Showing a keen interest in all aspects of the life of the university, Mandela also visited Fuller Hall, where Gra&#231a Machel's daughter, Josina, would later reside during her UCT studies. Josina went on to graduate with a Bachelor of Social Science in 1998, a year before her mother was installed as the Chancellor of UCT.