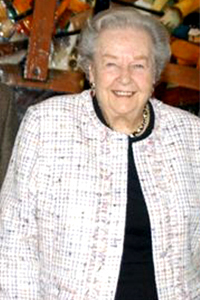 The late Bridget Oppenheimer's life was celebrated by her family at a private service in Johannesburg on 20 November. The 92-year old Oppenheimer had passed away in her sleep after a "short illness" late in October, her family said in a statement.

Oppenheimer's husband, the late Randlord Harry Oppenheimer, served as Chancellor of UCT from 1967 until 1999. The two shared a passion for breeding champion steeds, so much so that Mrs Oppenheimer was known as the "Queen Mum" of local horse racing.

Born Bridget McCall on September 28 1921, she met Harry Oppenheimer while she served as a signals lieutenant on Robben Island during World War II. He was a member of the Coastal Command at the time.

Mrs Oppenheimer ensured that the family fortune went some way to easing the plight of South Africa's less fortunate citizens. Her philanthropic ventures included spending weeks on the road in the 1970s visiting poor, rural communities around southern Africa to promote the energy-saving '˜Wonderbox', a device that allows impoverished families to cook nutritious food while saving up to 80% of the fuel they would otherwise have used.

The family also established the Harry Oppenheimer Fellowship Awards in 2001 to recognise South Africa's outstanding scholars and to support human and intellectual development. The award has been bestowed on UCT scholars four times between five individuals (two academics were jointly honoured in 2004).

Oppenheimer's children, Mary Slack and Nicky Oppenheimer, told Business Day in October: "Our mother had a long and full life. We celebrate her and her many achievements in so many fields. She will be missed by her children, grandchildren and great-grandchildren."