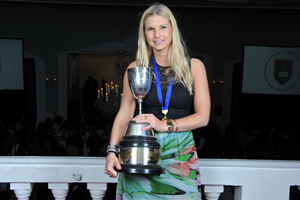 One question was on this reporter's mind as Alexandra Fuller - top-ranked squash player, first-team UCT hockey player, and Athletics Club member - beamingly accepted the 2013 Jamison Cup, awarded to UCT's Sportsperson of the Year: how does this Ã¼ber-athlete manage to pass?

Fuller is (take a deep breath) ranked seventh in South African squash and 101st in the world (moving up 85 places in nine months), was part of the Western Province team that won the provincial tournament, and was the runner-up at the SA National Championship in August, all while playing first-team hockey for UCT in the indoor and outdoor provincial leagues and in the FNB Varsity Cup hockey tournament - and still had time and energy for athletics.

If that's not impressive enough, Fuller outflanked three fellow nominees of the highest pedigree to claim her prize at the annual UCT Sports Awards on 11 October.

The Sports Awards were held at Kelvin Grove and not at the Cape Sun, for the first time "since 1652", quipped master of ceremonies Mike Wills. It was not the only first on the night, as the inaugural Coach of the Year trophy went to Rowing Club stalwart Brendan Gliddon.

The person credited with motivating for a Coach of the Year award, Kyle Hanck - also a rower - picked up the Turpin Cup for Service to UCT Sport. Hanck is a member of UCT's Student Sports Union (SSU), and an executive committee member of USSA Rowing. When rowing captain Sarah Bishop then came up to collect the Transformation trophy, it appeared the Rowing Club was threatening to dominate as they did in 2012; but the Underwater Club nipped in to claim the Club of the Year title.

Netballer Fortuna Bagula was named Best First-Year, while the water polo men's first team won the Landstem Trophy for Performance of the Year (and if there'd been a trophy for heartiest celebration, they would have won that, too).

Bur the rowers were not finished yet: the women's first VIII was crowned Team of the Year, after cementing their spot at the top of SA's university-rowing pile.