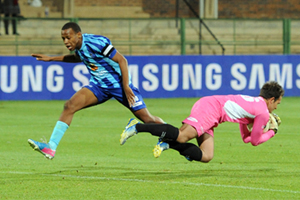 A UCT footballer (in blue) narrowly misses an opportunity to beat the Tuks goalkeeper in the Varsity Football clash in Tshwane on 12 August. UCT fell to a 5-0 defeat that night, leaving the side with one point after four matches. The Ikeys played their next game against log-leaders Tshwane University of Technology on the Highveld on 19 August. The inaugural Varsity Football Challenge showcases the country's top eight university football sides in a round-robin-style tournament similar to the Varsity Rugby and Varsity Hockey tournaments. The competition was "set to unearth hidden talents at tertiary level", said Kirsten Nematandani, president of the South African Football Association, before the games began. 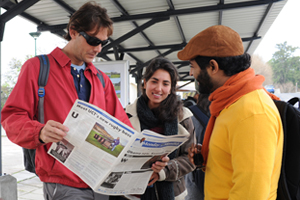 Shortly after the winter break, students read a copy of the first-ever edition of the Monday Monthly at a Jammie Shuttle stop on campus. The newspaper began as a weekly collection of classified adverts, and later morphed into a bi-monthly paper, called the Monday Paper, carrying campus news. As of July this year, it changed its guise once again to become the Monday Monthly. It enhances the robust Online Daily News on the UCT website by offering in-depth analysis, opinion pieces and details of UCT events and research. Executive director of communication and marketing, Gerda Kruger, says, "Our intention is to expand coverage of UCT's core business." 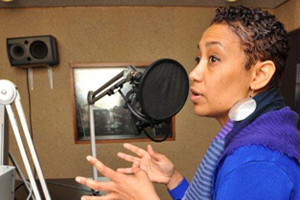 Yaliwe Clark, from UCT's Gender Institute, takes to the airwaves and passionately defends African women's right to a tertiary education, highlighting the many challenges female academics face on the continent. She was being interviewed recently by Parusha Naidoo and Wadeisor Rukato from UCT Radio. Naidoo and Rukato were presenting the pilot of the talk show The World at UCT which was sponsored by the International Academic Programmes Office (IAPO). The theme for this two-hour talk show revolved around Africa and saw DVC Prof Thandabantu Nhlapo talk about UCT's emphasis on Afripolitanism, and Ernest Kajabo from Rwanda talking about nation-building in his country after the 1994 genocide. 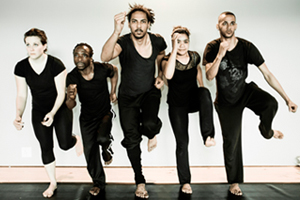 The global economy and its effect on individuals comes under the spotlight in I Hit the Ground Running, a cutting-edge dance and music performance piece that premieres at the Baxter Theatre later this month. Choreographed by Ananda Fuchs and featuring music by Swedish composer Tebogo Monnakgotla, the production represents a first-time collaboration between Scenkonst SÃ¶rmland (Sweden) and the Baxter Theatre Centre. A year in development, I Hit the Ground Running embarks on a nation-wide tour of Sweden after its Baxter season. It runs at the Baxter Flipside for one week only from 29 August to 7 September at 7.30pm nightly, with a matinee on 7 September at 2pm. 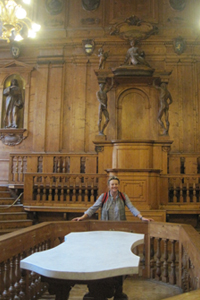 Professor Lorna J Martin, internationally acclaimed researcher and Head of the Division of Forensic Pathology, stands in front of a table in the Palazzo Poggi in Bologna Italy, which is allegedly the site of the first-ever autopsy. Earlier this month, in a lecture titled Dying to Begin, Martin discussed her several years of experience in autopsy rooms in Cape Town as part of the Medical Humanities public lecture series. She presented statistics and anecdotes from her professional career to highlight the intersections of this branch of medicine with the humanities and the arts. The lecture series comes ahead of a new interdisciplinary programme entitled Medical Humanities, soon to be offered at UCT.