Whisked away from a family holiday in Piet Retief, UCT alumna Pretty Yende, a young soprano from Mpumalanga, had barely two weeks to rehearse for her debut at New York's famous Metropolitan Opera on 17 January.

Tasked with replacing the indisposed soprano originally set for the role of Countess Adèle in Rossini's Le Comte Ory (a challenging score for even the most experienced performer) at a moment's notice, the undaunted UCT graduate jumped at the chance. The discerning Met audience followed suit, rising to their feet to applaud Yende's thrilling opening aria.

Not even a slip down the stage stairs during the opera's opening could daunt Yende as she serenaded the Met crowd opposite Juan Diego Florez, regarded as possibly the world's leading tenor for the "high lying and florid Rossini role", as opera veteran Angelo Gobbato described. 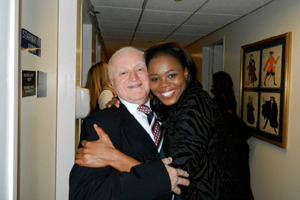 Gobbato, a former professor at UCT's South African College of Music (SACM), (pictured here with Yende), heaped praise on Yende and related the aftermath of her sparkling debut: "An endless queue of admirers waiting patiently outside her dressing room for her autograph and a flash of Pretty's special smile, that works its way right to the bottom of your soul."