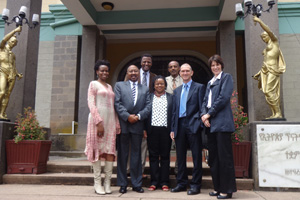 A recent Afropolitan visit to East Africa and the Great Lakes has enabled UCT not only to explore new collaborations, but also to hit the 'refresh' button on some of its existing partnerships in the region.

Deputy Vice-Chancellor Professor Thandabantu Nhlapo led a multidisciplinary team of scholars - representing economics, engineering, law, mathematical finance, occupational therapy and philosophy - to Ethiopia (the University of Addis Ababa, or AAU), Kenya (the University of Nairobi, aka UON) and Rwanda (the National University of Rwanda, or NUR) in September and October. Norma Derby of the African Partnership and Programmes section of the International Academic Programmes Office (IAPO) joined the team.

Reports from the envoy team suggest that the trip was a resounding success.

So, for example, Associate Professor Elelwani Ramugondo of the Division of Occupational Therapy had talks on modularisation of the curriculum and on disability and community-based rehabilitation at AAU, and set up exchange agreements and collaborative publications with counterparts at AAU and NUR.

Professor Ulrike Rivett of the Department of Civil Engineering held similar discussions, and identified particular opportunities for assisting with those institutions' computer science programmes. A meeting with senior management at AAU revealed great opportunities for PhD supervision, reported Associate Professor David Taylor of the School of Management Studies and the Department of Finance & Tax. Jacques Rousseau, also of the School of Management Studies, discussed staff and student exchanges with the University of Nairobi.

The three-strong team from the Faculty of Law - Professors Salvatore Mancuso, Elrena van der Spuy and Aifheli Tshivhase - made hay in Rwanda, exploring opportunities for joint research and teaching at the university and linking up with faculty alumni from their successful LLM programme. An important outcome of the Rwanda meetings was the agreement to train, at the request of the Chief Justice, members of the Supreme Court bench and the staff of the Court. And Professor Bernhard Weiss went scouting for graduate students and other forms of collaboration at UON, on behalf of UCT's Department of Philosophy.

During the Nairobi leg of the trip, the inaugural meeting was held of what could hereafter be known as USHEPiA Phase 2. First mooted in 1992 and launched in 1996, USHEPiA (Universities Science, Humanities, Law and Engineering Partnerships in Africa) has been UCT's flagship African relationship, grouping together the Universities of Botswana, Cape Town, Dar es Salaam (Tanzania), Nairobi (Kenya), Makerere (Uganda), Zambia, Zimbabwe, and the Jomo Kenyatta University of Agriculture and Technology (Kenya). The partnership has gone through a number of changes since 2009, when the main funders - Mellon, Rockefeller and Carnegie - announced their intention to end support.

When it was decided to introduce a self-funded USHEPiA model, half the partners had difficulty in participating. The ones who felt able to go forward together by raising the funds themselves gathered in Nairobi for the meeting.

"This revival of the USHEPiA brand is important because the partnership in many ways epitomises the university's Afropolitan vision," says Nhlapo. "For a decade and a half the programme broke new ground, helped UCT to play its part in capacity-building on the continent, and promoted the university as a meeting place between the continent and the rest of the world," he explained.

Nhlapo believes that the success of the trip lay in the group's multidisciplinary composition, the opportunity to pursue diverse departmental initiatives with African partners, and the satisfaction expressed by all the hosts
"The next step is to ensure that real activity flows from these contacts - 2013 should see us adding a Francophone and Lusophone dimension to our explorations."