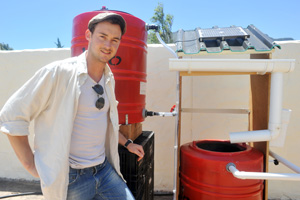 Water-borne: Benjamin Biggs (in picture) and Carl Jacobs developed and tested an application that uses a solar-powered pump to facilitate the re-use of grey and/or rainwater at domestic household level.

Four final-year civil engineering students who are graduating on 17 December created practical models of direct solar-powered systems which could play a part in conserving and protecting the environment.

Jacobs and Biggs developed and tested an application that uses a solar-powered pump to facilitate the re-use of grey and/or rainwater at domestic household level.

"The project involved quite a lot of practical, hands-on work," said Jacobs. "Building, testing and then seeing the results of the pilot system was very rewarding. The system can be scaled up to be used in industrial, commercial and/or retail applications.â€

This system has great potential in rural environments.

"It is generally the case that these areas do not have access to an electrical grid from which power can be sourced. The most common substitutes are diesel-powered generators.

Although the capital cost is lower (depending on the system's power requirements), the operation and maintenance costs can be four to ten times the net present cost of a sola-powered equivalent," he explained.

The water re-use system is easy to install, and requires very little maintenance.